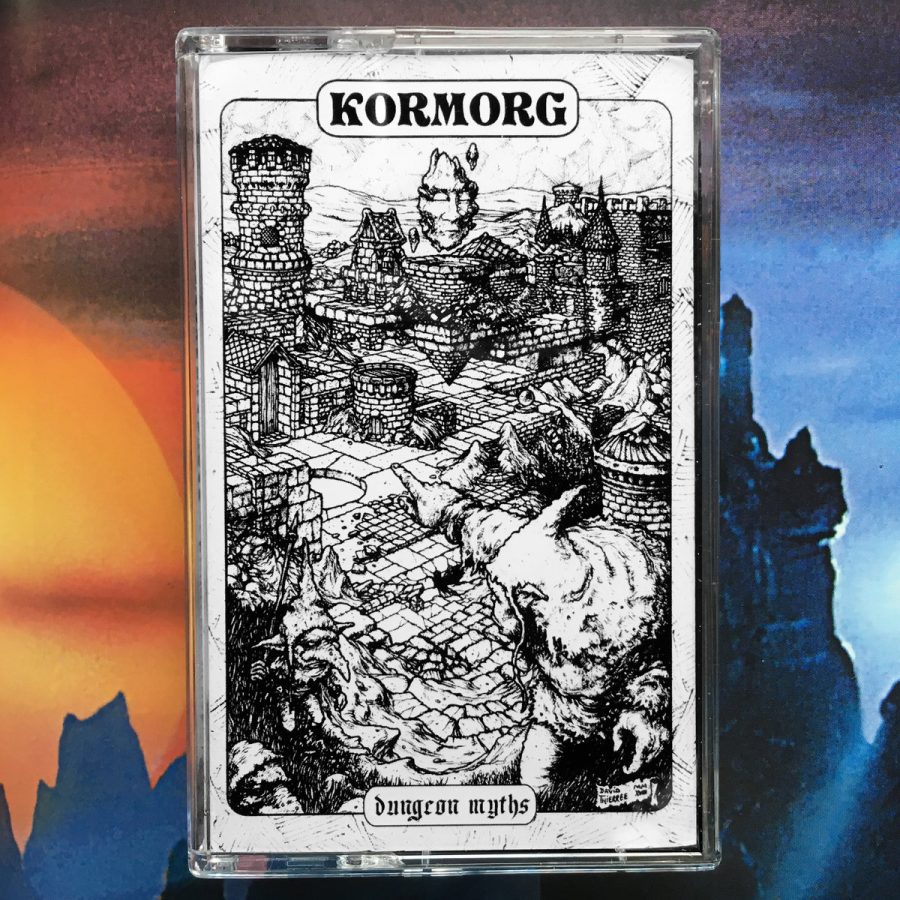 For this review, I’m proud to share with you the writings of a new associate of ours, Matteo Brusa, known to the dark ambient and dungeon synth communities for his work as Medhelan and La Tredicesima Luna. I’ve reviewed albums of his by both projects and I’ve also interviewed him. I know he has a much more thorough understanding of the dungeon synth genre than me, and therefore more authority to call a release good or bad. For this reason, among others, I hope he’ll be returning soon with more reviews for us of whatever albums he sees fit. Enjoy!

If you are into obscure dark and atmospheric music genres in 2019 and you’ve never heard of Dungeon Synth, you’ve been living under a rock. Since its inception as an offshoot of the Norwegian Black Metal scene in the early ’90s, the genre has gone through several phases, from its experimental beginnings in pure Black Metal spirit to its revival in the 2010s and subsequent growth, eventually gaining its current status of underground popularity, supported by an ever expanding international online community. This momentum, coupled with the relative ease of recreating a certain sound and aesthetic quality (albeit not necessarily the spirit), has produced in recent years an endless flood of mostly copycat Dungeon Synth projects, making it very difficult, with the notable exception of a few household names, to sort the wheat from the chaff. 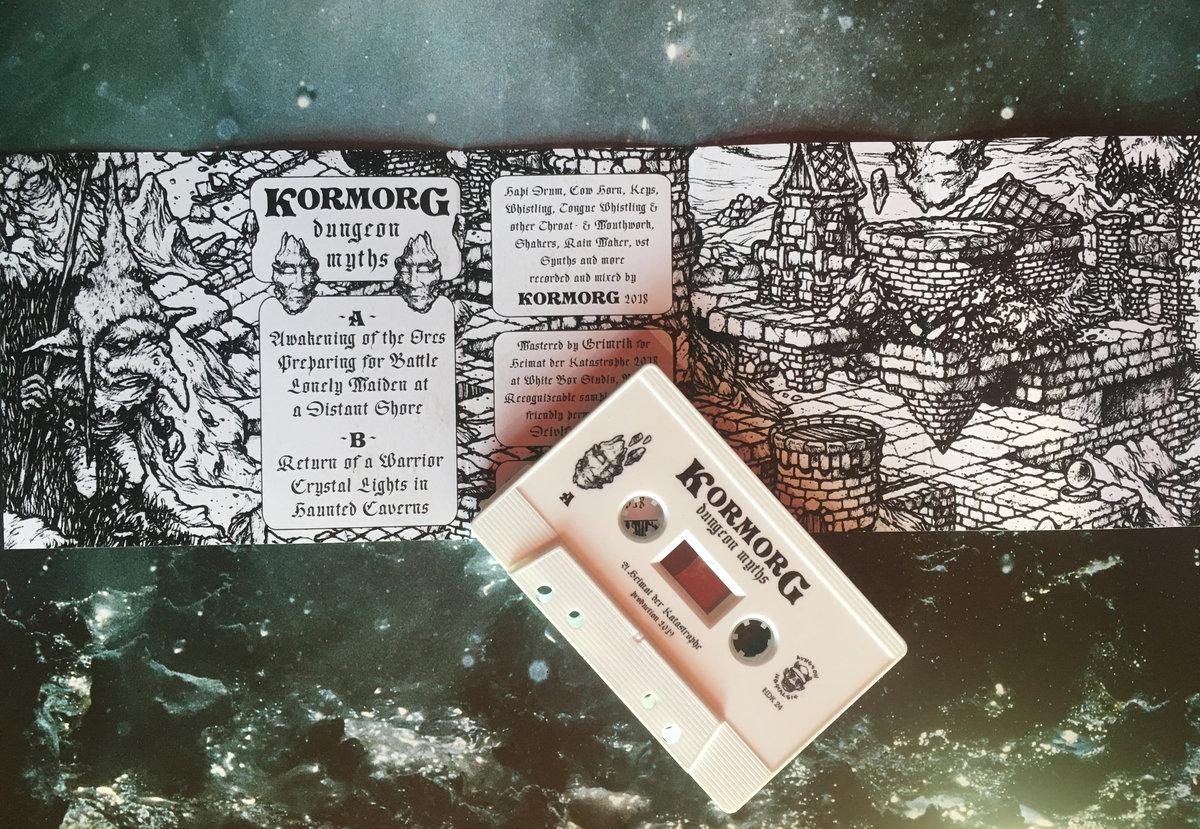 Released in cassette format by the Italian experimental label Heimat der Katastrophe and instantly sold out, KORMORG‘s apparently unassuming debut Dungeon Myths first catches the eye thanks to its lusciously evocative hand-drawn artwork, courtesy of veteran artist David Thiérrée; a quick glance to liner notes on Bandcamp reveals some more interesting details: first, we are told KORMORG is a new project by an unnamed well-known artist in the current scene; moreover, the album incorporates samples from several established acts (including my own work), suggesting a rather uncommon sample-based approach to composition. The most astonishing part of it, though, turns out to be the music itself: opening track “Awakening the orcs” sounds gorgeously deep, crisp and clean, showing off a painstaking care for detail and sound architecture which is way more common in pure electronic ambient music rather than Dungeon Synth; most of the sounds appear to be crafted by heavily editing various kinds of samples, a technique especially evident in background soundscaping, drones and percussion parts. The ambient-rooted, sample-based compositional style shines even more brightly in the following track “Preparing for battle”, which builds up an epic, heroic soundscape over a simple drone-like structure, and in the highly atmospheric closing track “Crystal lights in haunted caverns”. “The lonely maiden at a distant shore” is the closest this album gets to electronic down-tempo music, with its lonesome and mystical feel somehow reminiscent of early Delerium, while “Return of a warrior” shows a distinctly cinematic edge juxtaposed with electronic beats (a recurring stylistic choice throughout the album). 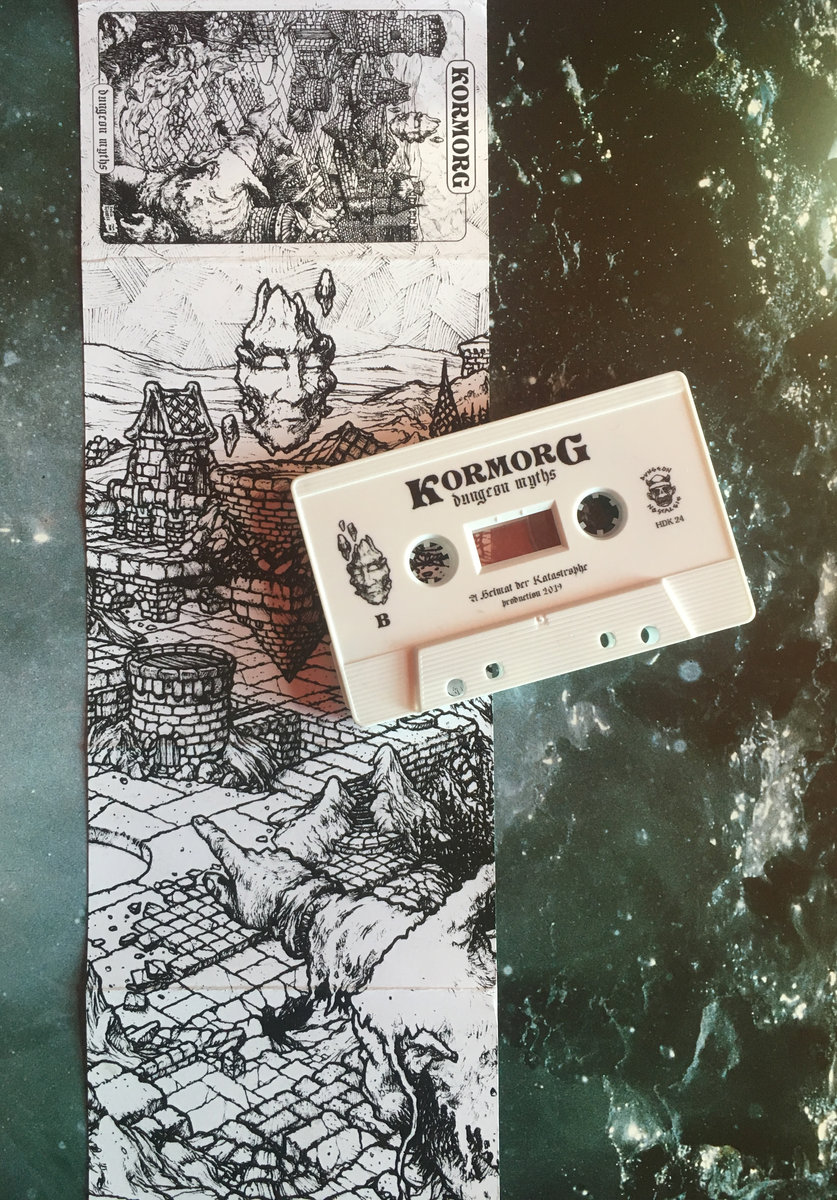 What really makes KORMORG‘s music unique compared to its peers is how, while clearly being professionally produced and composed with an electronic musician’s mindset, it still feels very much like Dungeon Synth, evoking the same kind of spirit and imagery found in the genre’s milestones. Dungeon Myths is probably the greatest thing happening lately to the scene: by combining a skillfully original approach to a deep knowledge of Dungeon Synth’s tropes and themes, while maintaining a respectful attitude towards its roots, it comes off as incredibly fresh, engaging and brimming with spirit, a much needed infusion of novelty in a genre quickly becoming stale. Highly recommended and definitely a highlight of this year. Rumor has there will be a re-issue, so be sure not to miss it again.

Written by Matteo Brusa of Medhelan and La Tredicesima Luna