Since Desiderii Marginis is the first interview in La Delaïssádo, let’s have a listen to his latest album while reading!

Early in 2020, a little after the full realization of what Covid-19 had in store for the world, I received a very interesting e-mail from a fellow named Bertrand from France. He explained that he’d been a writer and co-editor at Convivial Hermit Magazine and the Obsküre webzine for nearly 20 years, and was now ready to spread his own wings and delve into a printed fanzine of his own creation. He asked me to be one of the interviewees for the first edition and I gratefully accepted.

So, here’s a bit of an overview of what you can expect in this first issue and how you can get your hands on one of the 199 copies, before they are gone forever. And last but certainly not least, I asked Bertrand some questions, myself, which well help give a bit of extra background on Bertrand and his motivations/ambitions going forward.

Let’s start with the physical aspects of the zine. It’s a soft glossy covered 172 pages in the A5 format. It is presented in black and white only. For a fanzine, which will certainly be making its way all over the planet, I think this was the right choice. The presentation is very clean, and the readability is top-notch. While, the costs of production were likely able to stay relatively low, which is why he’s selling these for a mere €6.50. That low price also helps to negate some of the incredibly high shipping costs that the world has been experiencing of late.

As for the name and content of La Delaïssádo, Delaissado is an Occitan word meaning “abandoned”. The zine covers a number of articles, crossing a swathe of topics. The first being a lengthy conversation with Desiderii Marginis, the renowned dark ambient musician. Followed by an interview of Laurent Clement of the Dead Seed Productions record label. Then, he interviews me, journalist behind a dark ambient zine. Then, he has an article about the very interesting historical location of Montsegur. And so forth. As you can see, La Delaïssádo comes at journalism in a very similar way to This Is Darkness, focusing little on the need for strict adherence to format, and more on introducing readers to a breadth of interesting topics, seemingly compiled only at the whims of the writer(s), but still managing to be of a cohesive whole concept.

I was expecting to only see music related articles in La Delaïssádo. But, upon reaching the fourth article. I found a very interesting historical take on the French site of Montsegur, which I had a basic awareness of, on account of the possible Cathar connection to The Curse of Oak Island, a tv show that follows a treasure-hunter/archaeologist motley crew as they throw all sense of monetary concern to the wind, in search of the fabled lost treasure, which the Knights Templar left somewhere on Earth, or not… What followed in La Delaïssádo was an incredibly well prepared look into the Cathar history of the site, and the story of its ancient seige and destruction. The narrative was presented from the first-person perspective of Bertrand, La Delaïssádo‘s editor, recounting his first trip to the location for some basic hiking and sight-seeing, which turned into a more spiritual experience than he’d expected.

There were four more articles that were interesting divergences from specifically musical topics. Inside the Den of a Dreamer: Gustave Moreau’s Museum takes us on a ‘textual tour’ of the beautiful museum in Paris, which had previously been Gustave Moreau‘s workshop. The interview with Amy Cros explains what brought her to study Occitan languages as well as how and why their preservation is necessary. Laura-Lee Soleman is a French plastic artist. She works in a style that would be considered quite dark to many. She explains how music, film (particularly those of Béla Tarr) and life-experiences can lead one to creating different forms of art for different reasons. And lastly, we are given a very interesting interview with the owners of the Brasserie Ouroboros, a unique craft-beer brewery in the Auvergne region of France. While the beer is the main attraction here, increasingly this brewery, perched in a little mountain village named Freycenet-la-Tour near Le Puy-en-Velay, is becoming a hot-spot for concerts, which often include the likes of black metal and other dark/occult/alternative styles.

Readers will also find, scattered throughout this issue, a number of reviews, most closely resembling the format/length of those we are used to seeing in Noise Receptor. These reviews mainly, but not exclusively, focus on recent dark ambient and black metal releases. Other articles included focus on: Jean-Philippe Jaworski, Forêt Endormie, Cioran Records and Hecate.

For the rest of this article, let’s have a look at what Bertrand had to say to me about the zine’s first-issue-development and what we can expect in future issues. 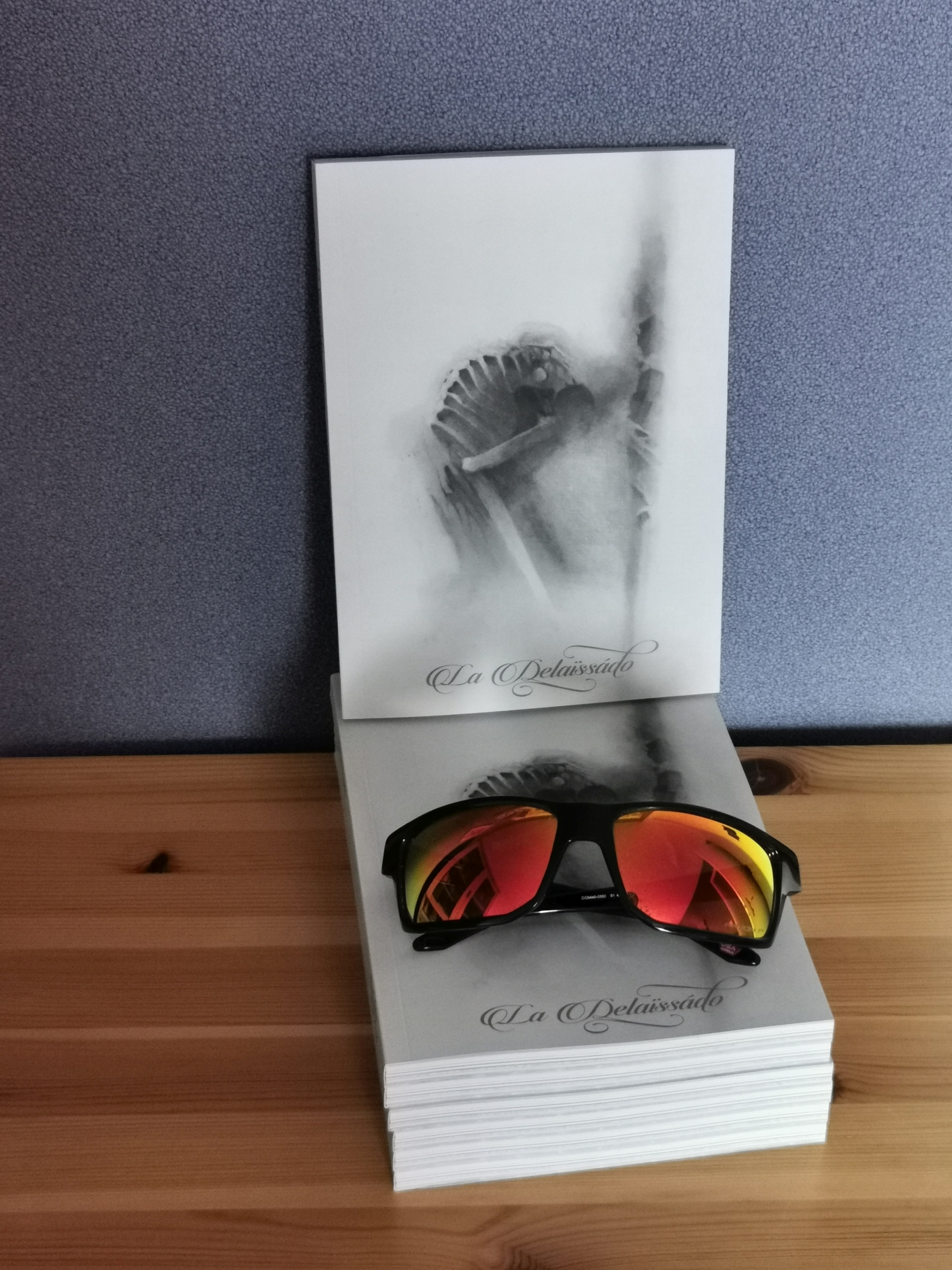 Michael: France and Occitan language seems to be very important to you, as it plays a prominent position throughout this first issue. What is it that drew you to focus on this region/culture? Have you always been interested in such things relating to (your) heritage, or has this interest increased as time passes?

Bertrand: We French are a self-centered bunch as is common knowledge. Joking apart, you do raise a good point with this: in recent years, I have found that my curiosity toward people and their occupations tends to have me look ever closer to home sweet home, not in a flag-waving “support your local scene” movement, but at some point I just seem to have lost some of the impulse for canvassing the unlikeliest recesses of the globe in search of bands and styles no one has ever talked about – sometimes for a reason. On a personal level, I am very much aware of my heritage as you put it, which is inextricably bound up with the Occitan influence on culture, architecture, landscapes, and people since the Middle Ages. Occitania, more specifically the broad area from Auvergne (where I live) to the South-Western Pyrenees, is where I spend most of my vacation time. I am not a huge traveler but I got around a fair bit across Europe on account of being a compulsive hiker and museum rat, and I easily enjoy myself everywhere, but the sense of belonging is real. It is true that the fanzine partly reflects this. What can I say, if an article can get someone interested enough to look up either Auvergne, Dordogne, Aubrac, Languedoc, Pyrenees, or all at once in a search engine and maybe contemplate a trip, then huzzah I guess.

Michael: It seems fairly evident that you are a huge fan of black metal and dark ambient music. Will these be your major musical focuses going forward with La Delaïssádo, or will you be covering anything/everything that tickles your fancy? If the latter, what other genres are we likely to expect to read about?

Bertrand: I curse myself on a regular basis for the irrepressible urge to flesh out my album collection in a dozen parallel directions, but I think spreading a zine too thin would do it a disservice. As much as mono-themed zines present challenges of their own, I also see a need for limits, at least as long as one hasn’t maxed out their street cred. As it were, extreme metal, dark folk and dark ambient are the genres I feel most comfortable talking about, so even though classical music, 70’s prog/rock and electro/IDM make up a fair share of my time with music, small chance I’ll cover these genres beyond the occasional review, except if nailing a super exciting interview through some chain of circumstances. In fact the Forêt Endormie interview in #1 encroaches on classical music talk to some extent, but I’m certainly not competent or even willing to discuss classical music as a “specialist”.

Michael: You clearly have a great appreciation for art, in its many forms. But, I noticed throughout the issue that you mention not being very good at several different artistic formats. Do you consider your writing to be your main artistic talent, or do you have any other focuses: painting, music, sculpture, etc?

Bertrand: I have never applied myself to practicing music or drawing nearly enough to be able to determine if some calling is asleep inside of me, though I’ve dabbled in creative undertakings a few times and still strum the occasional chord with all the nimbleness of a dead plant. So yes, writing is what I do, though to speak of a talent… I took up to gardening recently, if that counts?

Michael: Do you have any plans for a set release schedule, or will issues release whenever the timing is right?

Bertrand: If I’m being 100% honest here, La Delaïssádo’s first issue was a work of obsessive commitment for the better part of nine months (being my first solo editorial project from A to Z) but I went at it like a blinkered horse chased by a swarm of hornets, not paying much attention to its cohesiveness as a magazine and (mis)using the cracked page design software in ways I certainly wouldn’t replicate now that I’ve learned the ropes. As a result, and to keep it brief, I am both pleased on the whole with it and very much aware of a hundred shortcomings, and also so spent that I’d rather lay the “classic” way of doing fanzines (interviews, reviews, articles, rinse and repeat) to rest for the time being. Right now I have a wholly different book concept in mind, which I’m pretty excited about, but it’s all very early-stage. La Delaïssádo will return with near certainty for a second serving but there is no schedule whatsoever. Might be in two years, might be in five. “Whenever the timing’s right” sounds like a plan. I’m not out to retain a readership, that much is clear.

Michael: Thanks so much for covering This Is Darkness in your first issue! I’m really pleased with how the entire zine turned out, I had no idea what to expect when you first approached me about an interview, last year. I hope we will find some way of collaborating again in the future!

Bertrand: Thank you for having me on your excellent platform in return. It does feel odd to be interviewed as a zine editor, especially just after a debut issue that has sold fewer than 100 copies so far, but nothing is sacred anymore in this time and age. I will be sure to keep a close eye on the developments at This Is Darkness!

Be sure to grab a copy of La Delaïssádo here before they are all sold-out! There were less than 100 copies left at the time of writing this, and I’ve already been told that several friends have purchased copies over the last few days. So no slacking! Support independent journalism and fellow genre-lovers that put in such time, effort, and capital, to make something like this come to be a reality!

Frozen In Time: This is Darkness playlist – May 2021