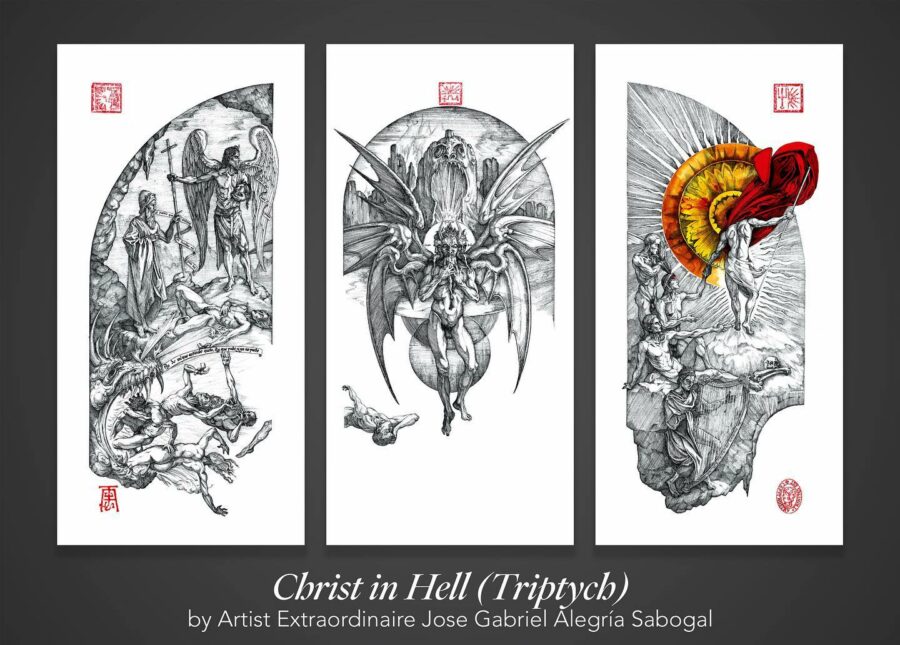 Here are the dark ambient albums that we at This is Darkness have been listening to this month – some are new releases, but a few are older gems we’ve just (re)discovered. Please check these out by clicking on the Bandcamp links, and consider supporting the artists. This month, we are also including some extra news from Anathema Publishing, among other things! Enjoy!

A composition crafted during the fires that destroyed the island of Evia in Central Greece in the first week of August, 2021. Melophobia (μελωφοβία) is an experimental project by Dimitris Tsironis, started in Greece in 2001. Melophobia’s main interest in electro-acoustic / improv / experimental music is crafted and assembled through various analogue sources. The abstract manipulations of sound are alternately ambient and aggressive.

The Crypt of Memories – At war with reason

Crypt of Memories is an orchestral dungeon synth project from Greece created in 2020 by Groeg Zfardasi, known to This Is Darkness readers for his work in Martyria. This roughly thirty minute album delivers some epic dungeon synth which moves with grandeur through the first two tracks, before slowing and descending into a much darker and more subdued place on the third track “Grimoire”.

The Lovecraft Sextet – In Memoriam
Jason Köhnen (Mansur / The Kilimanjaro Darkjazz Ensemble / The Mount Fuji Doomjazz Corporation) returns to his experimentations within the realms of Darkjazz. The Lovecraft Sextet is his new creative outlet regarding further explorations into cinematic jazz orientated compositions. ‘In Memoriam’ is a debut inspired by death, release and rebirth. Jason Köhnen has chosen to incorporate funereal aspects of classical, operatic and Gregorian music for this debut release.
The song ‘De Mysteriis’ is inspired by Mayhem’s ‘De Mysteriis Dom Sathanas’. The music is also linked to his first short-story which was written to accentuate the music (and vice-versa) and will be part of the ‘In Memoriam’ release.

Beyond the Ghost – The Desolation Age
Beyond the Ghost presents his second album in the Europa Series, a futuristic, bleak and moving sound voyage that merges electronics and acoustics.

London, the year is 2061. War is raging across Europe. Ultra-nationalist powers are fighting against each other, trying to conquer more territory and assert their supremacy. In London, enemy armies of cyborg soldiers and drones are taking over the city. The capital is quickly falling into ruins, the dust from the rubble is still suspended in the air. Survivors gather in damp cellars, crouching in fear, swapping stories about how life used to be before authoritarian governments started playing their evil power games. Meanwhile, the soldiers of the Alliance, brainwashed and merciless, wreak havoc in the streets of London, a city now void of life and light. Retaliation is long overdue, but for now all hope has been annihilated and the fear has taken over. Europe has become a vestige of the past, torn to pieces and trampled upon. This is the Desolation Age.

Alone in the Hollow Garden – 156
Alone in the Hollow Garden has been one of my favorite ritual ambient projects for quite some time. However, I have only recently been digging deep into their back-catalog of releases in a more focused manner. (More to come from those endeavors in an upcoming Twitch stream sometime in the next month or two!) So, it is with great pleasure that I have been able to enjoy this brilliant new release by them, to coincide with my re-ignited love for their ritualistic soundscapes. Highly recommended works here, along with many of their previous albums!

“Released at the Magick Portal of the Autumn Equinox, the 22nd of September MMXXI. Lyrical parts on ‘156’ were stolen with love from Aleister Crowley’s ‘Waratah Blossoms’. Text fragments from ‘Azoëtia’ by Andrew D. Chumbley are also featured on ‘The Twin Serpents of Life and Death'”

Juuyokka has delivered a brilliant new traditional Japanese music inspired dark ambient / dungeon synth-esque release, which has just the right blend of elements that will intrigue the discerning This Is Darkness reader!
“Nature calms my conscience. I am old and past battles are only a distant memory. I remember those dark days when everything was chaos, war, disease, death. I had to struggle deep within my soul to retain the creative energy that educates my students and uplifts my spirit every day.”

Cave Mouth – Mare
“Mare” is a track from the upcoming Cave Mouth album Daughters of the North. Cave Mouth is the project of wyrd writer and photographer Katie Metcalfe, along with Meghan Wood, also known for her brilliant work as Crown of Asteria.
lyrics
Even if you count all the stars
In the sky I’ll come

raison d’être – Daemonum & Daemoniacum
“Daemonum marks the 30-years anniversary of raison d’être. With Daemonum raison d’être scrutinizes the secrets of the Shadow; the Anima/Animus archetypes and the manifestation of them as a Soul image. By learning to listen for the voice of our subconscious self, we can call that voice our Daemon, our internal genius that provide guidance, we can find hidden potential within ourselves. Daemonum is the album of the daemons.

Hunting in the shadows, for the hidden and the opposite, Daemonum is another crossing, deep down to the shaded domains of the inner world. Struggling in blindness and oblivion, guidance and protectors are needed to unfold the obscure matters of our unconsciousness.

And to mark this 30th anniversary release, we’re offering an exclusive and limited special edition of Daemonum, a double CD or triple LP which includes a bonus album, “Daemoniacum”. Think of Daemoniacum as some sort of anti-polarized version of Daemonum, as if Daemonum was haunted and possessed by a demon. As if the daemon inside is turned into a demonic creature because the host becomes obsessed by the demon. As if the Anima/Animus was intruded and molested or rejected and deformed, infecting the host, causing a different and repressed output. Daemoniacum is the album manifested by the demons. Artwork by Nihil.”

Check out Wordclock’s recent interview from This Is Darkness’ Twitch Channel, uploaded on YouTube!

Wordclock presents us his 4th album on Cryo Chamber

Religious visions and apparitions form some of the most universal and striking stories and myths. The desire for breakthrough and grasp of bliss through direct experiences has given way to incredibly imaginative visual and intelectual descriptions of sights of gods in both blissful and hellish states . A Greater Bliss draws upon these stories and writings to create a world of sounds that seeks to mimic the various facets of these myths, from the heaviest and most desperate to the blissful and dreamlike.

The resulting album breaks apart and merges together a diverse amount of genres and musical backgrounds in wide swelling motions and dreamlike musical fragments in both free form and mantra like compositions, crashing acoustic instrumentation with tape fragments and digital spectral synthesis. From contemporary and dark jazz to traditional music, neoclassical, ambient, ritual religious music and electronic experimental. Spiritual and Touching.

Pierre-Yves Martel – Weird Studies: Music from the Podcast vol​.​1
This beautiful vinyl release by Martel is a companion album to the Weird Studies podcast, which was created by his brother, writer/filmmaker J.F. Martel and Professor Phil Ford. The album is a brilliant take on ‘dark jazz’, filled with numerous instruments which fill out this project into a proper experience, which at times is subdued and almost dark-ambient-esque, and at other times blooms into a full-band climax. Highly recommended!

Mother of Sighs by Mother of Sighs
Terrence Hannum (Locrian) and his significant other, Erica Burgner-Hannum, best known for working together as 2/3 of The Holy Circle, have returned with my personal favorite project by either/both of them to-date, Mother of Sighs. This album is perfect for the coming Halloween season, with it’s brilliantly spooky atmosphere. The album would fit perfectly into a late 70s or early 80s Dario Argento film, if that is any indication of what is to be expected here. Must be heard to be understood. Terrifying and brilliant. Highly recommended! (They also have a t-shirt of this awesome cover-art available, which I am wearing constantly!)

G. McCaughry Interview with Michael of This is Darkness

Michael recently spoke with Anathema Publishing’s founder Gabriel McCaughry on This is Darkness’ Twitch channel about the ethos of Anathema, their latest releases, and their new venture into dark ambient music distribution through their webstore. Check out our conversation on YouTube, and also subscribe to our Twitch channel to see these interviews live!

This is the latest from Anathema Publishing, now available for pre-orders in several hardbound editions. Greg Kaminsky focuses on the works of Renaissance philosopher Giovanni Pico della Mirandola and their influences on Kabbalah and the rebirth of Western esoteric traditions.

“The following triptych explores the narration of Christ’s descent into Hell, according to the Gospel of Nicodemus.

Stylistically the aim has been to achieve the sensation of a floating world, purposefully seeking for mannerism in several figures, it seeks to draw without restrictions of space or gravity. This follows the descriptions of Tartarus or Gehenna as a bottomless pit.

(…) But why did Christ descend to Hell during the day in which he was dead? Redeeming the ancients seems to be the answer of the Apocryphal Gospel. But if so, why were they in Hell without a fair judgement? Were they not righteous men? Or is it perhaps that the Gnostic interpretation comes into play after all, and their sin was not of a moral kind, but ignorance, ignorance from a Revelation that they could not have achieved before? And so, the light of the sun would play a double symbolism in this narrative, as the light of knowledge. But how could this be consistent with the history of salvation as preconceived by a just God? How could the later notion of Purgatory be developed if so? Perhaps the impossibility of answering such questions is what led this to be an apocryphal piece, that could not fit any consistent doctrine of salvation. Therefore, the descent into Hell remains as a mystery. But a fascinating one.”

~Excerpt from a lengthier essay by José Gabriel Alegría entitled: “Christ in Hell”.