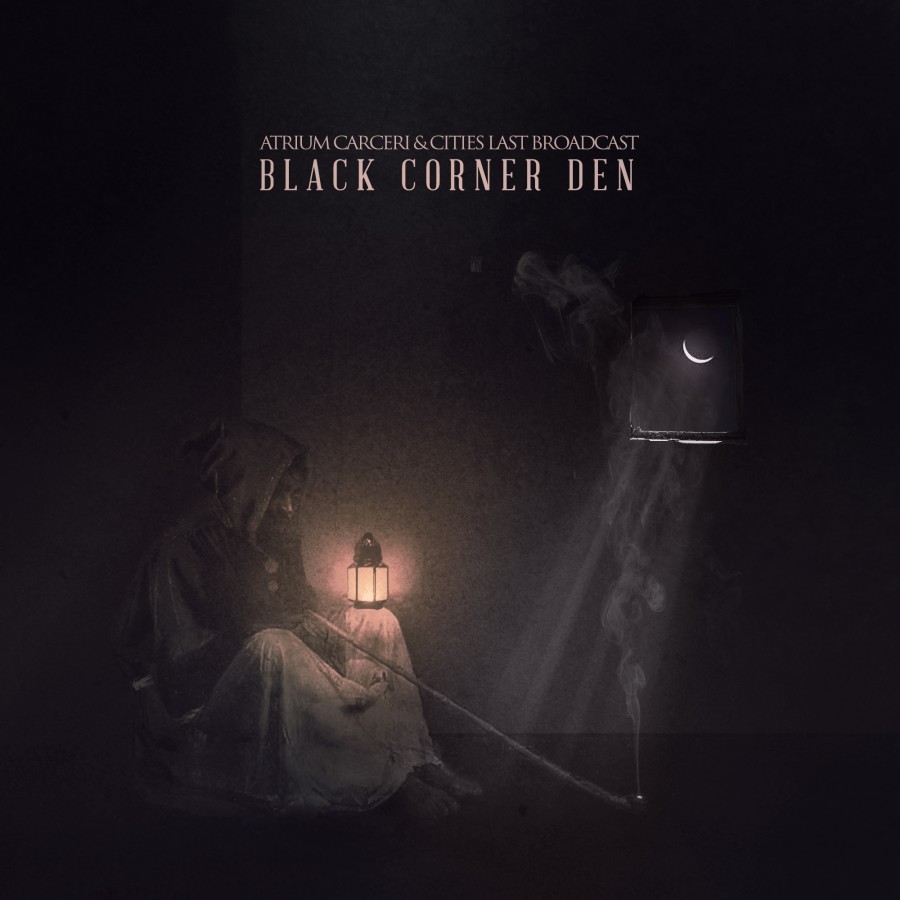 Occasionally an album will come along that I plan to review, but procrastination comes for a totally different reason than usual. I didn’t want to review this album because that would mean it would no longer be at the top of the list. Black Corner Den is an album that comes just about as close to my idea of dark ambient perfection as I could imagine. Granted this is a wonderful genre with dozens of first class artists (at least dozens). But, this album clicks for me on just about every level. The procrastination was compounded by the fact that this is the first release on Cryo Chamber to have a vinyl format! So, I wanted to wait for that beauty to arrive before I would proceed. Now that I’ve had almost a month with the music, and a week with the vinyl, I’m in a position to speak on it properly.

The combination of Simon Heath and Pär Boström we already know to be a recipe for success. One need look no further than their original collaboration, Onyx. These two gentlemen, along with Robert Kozletski of Apocryphos, created an album in Onyx which would be one of the others at the very top of my list of favorites. Onyx and Echo, the two previous collaborations between Atrium Carceri, Kammarheit and Apocryphos, showed a reserved side of these artists talents. Occasionally there would be some outright melodies in the music, but in general they were both cool, dark subtle releases. Pär Boström taking the guise of Cities Last Broadcast on this project is the first hint that Black Corner Den will show a more gritty edge to the music’s direction. Atrium Carceri can prove to be a wild card. Simon Heath is as likely to create a piano oriented track on the periphery of neo-classical as he is to create something that is squarely post-industrial, occasionally even close to death industrial. Black Corner Den manages to capture a little bit of all these elements without feeling forced or disjointed, which isn’t an easy feat.

The opener, “Laudanum” is the quintessential intro track for a collab between Boström and Heath. There are ghastly voices barely audible in the background, reverberating piano notes and a staticy white noise giving the whole thing a thick hazy texture, even in the 24-bit digital format. Of course, thick reverb, static and other strange background noises all prove to perfectly complement the vinyl format. “Prepare the Stage of Night” might be the track showing the most similarities to Onyx. Yet, it is immediately obvious that this track has been given a heavy dose of Cities Last Broadcast treatment. The feeling of the cool night air immediately draws a comparison to “Night so Close to the Tongue”, but the other sounds surrounding this element, which add an urban feel to the mix, lend themselves more toward the first Cities Last Broadcast opus, The Cancelled Earth. Simon Heath is able to play right into these vibes as Atrium Carceri, as he’s proven time and again on tracks like “Floating Above the City” or “Industrial District”. These vibes are drawn even closer to the surface on the following track “An Atrementous City” which becomes even more urbane and gritty, but balances itself out with a classic example of Atrium Carceri piano-work.

“A Deeper Dream”… This is sure to remain one of my favorite tracks by either Pär Boström or Simon Heath for a long time to come. The track is subtle and melancholic with its gentle droning atmospherics which leave ample space to showcase a simplistic piano arrangement which somehow manages to pack a whole album’s worth of emotion and energy. Maybe it was by design, or maybe I feel this by coincidence, but this track touches me in a way that few artists are able to affect. Listening to this many nights after watching the latest episodes of Twin Peaks: The Return, I can’t help but feel a strong influence from the works of Angelo Badalamenti at play here. That melancholic, forlorn emotion which simultaneously delivers a dose of hope… it’s a hard feeling to produce in a listener, yet it is felt on every single playthrough of this track.

If we are listening on vinyl, we will flip it over at this point. After such an emotional track, in “A Deeper Dream”, Side B brings on a renewed sense of energy. “Wind-Up Orchestra” has a strong feel of Atrium Carceri. This could easily be something we would hear on a new solo album of his. Probably erroneously, I like to imagine that even with his collaborations, Simon Heath has a side-story in the canon of Atrium Carceri playing out. Teasing out this idea, one could imagine that this opium junkie, lying about in the dingy back corner of some late 19th century opium den in London is in fact a protagonist of the Atrium Carceri canon. If one of these main protagonists truly went through so much chaos, a relaxing evening allowing the mind to melt away would hardly be unwarranted. Using Sherlock Holmes as an example, great protagonists often have equally great vices. The hero is rarely a saint, instead they are often as flawed in one way or another as the rest of us. If, indeed, this were to be an actual protagonist from the Atrium Carceri canon, then I would see “Wind-Up Orchestra” as representing a startling awakening from a deep opium-induced stupor, a proverbial bucket of cold water to the face. “House of Tinctures” and “End of the Century” draw the album to a close on, what I would consider, an emotionally positive note. Both tracks seem to show a sense of wonder, hope and fulfillment, where before we were drenched in thick hazes and deep dark brooding emotions.

Black Corner Den is a terrific first vinyl release for the Cryo Chamber label. I couldn’t have imagined a more fitting release to test the waters of this medium. Cities Last Broadcast begs to be played on a staticy record. The content of Pär Boström’s music as well as the technical elements make for the perfect pairing with vinyl. The artwork on this release, courtesy of Simon Heath definitely moves in a different direction from his already wide selection of previous cover-art. It is simplistic and yet elegant, with the opium-fiend resting in the dim corner, pipe smoke wafting passed the moonlight shining through the tiny window. Its a great fit for an enlarged cover-art and the matte finish adds even more to the overall aesthetics.

Black Corner Den is a must have for any discerning dark ambient fan. Considering the numbers of sales already reflected on the Bandcamp page, as of this writing, it seems people don’t need my advice to know an instant classic when they see one. Each track on this album is indispensable. Pär Boström and Simon Heath have truly outdone themselves, which is a rather bold statement considering the discographies of the two artists in question. Hopefully this will be a sign of more great things to come in the future, concerning collaborations between these “two bearded Swedes” as well as vinyl releases on the Cryo Chamber label. After this one, both are clearly warranted.