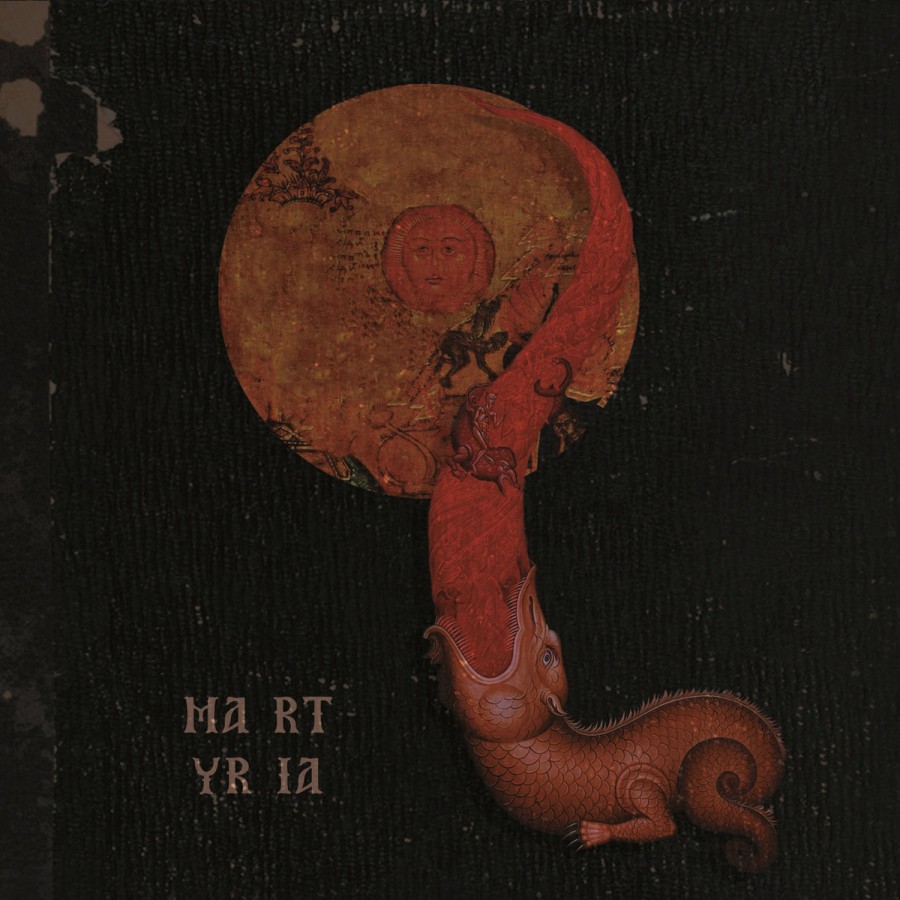 Ambient music often carves out paths to enlightenment by providing head-spaces for spiritual and emotional self-discovery. In this way, the style connects back to the origins of musical expression as a whole, in which ancient peoples used chants and rhythms to facilitate reconciliations with their place in the universe. This cross-section of ambient and traditional world music is where Martyria find themselves. Using tribal instruments and ancient eschatological texts as their basis, Martyria scour the vanguard of ritualistic music at the very foundation with their debut LP.

Martyria use the most resonant and monolithic qualities of their instruments to create their unique aura. Zafiriadis’s didgeridoo and ozark harp hardly function as exotic relics, taking the reigns of “Pneuma” and deepening the roots of its terminative tale. Echoes of rhythm linger and overlap in the song’s arrangement, which in this case function more to vectorize the song’s atmosphere rather than to confine it to a rigid structure. This unconscious movement allows Merkouri’s stirring byzantine melodies to find footholds rather than aimlessly drift, evidencing the project’s primeval elements, while allowing them to express their own inner dialogues.

“Nekros” divulges into less world music tendencies, allowing synth and processed samples and vocalizations to drive its amorphous labyrinth. The song’s emotional crescendo reveals some of the most fearful passages in the record, encapsulating the forlorn dread coinciding with fatal premonitions. While similar armageddon-centered music often evokes the terror of its subject matter as they imagine it occurring, Martyria hovers spectrally through the ashes of crumbled civilizations and bears witness to humanity’s end. With their aboriginal substratum intact, Zafiriadis and Merkouri confront the ultimate finality of existence and presents a unique vantage point from which to explore universal destiny.

Though the aforementioned track makes more overt use of modern synthesizers, this album’s seamless integration of the modern and the prehistoric allows it to remain entirely unified in its vision. “Nyx” remains perfectly balanced in this regard, with its distant chants and thudding percussion seemingly echoing off catacomb walls. Even the electronic drones hark back to a time long past, bolstering a ghostly flute melody as they illuminate mysterious sacraments. Additional voices and soundscapes trickle into the mix, filling the atmosphere so tactfully that one might not realize their submergence until the song releases its grip on the senses.

Howling winds begin the last and longest track “Eschaton,” as Merkouri’s spellbinding laments beckon listeners into the shaman’s cave for one last rite of passage. She and Zafiriadis create a cyclopean choral, free-flowing from hair-raising shrieks to oceanic swells. Their ability to simultaneously build tension to a breaking point while assuaging the listener into a trance, imparting a state of mental limbo between paranoia and prayerful tranquility. This particular track’s use of field recordings emphasize the transportive qualities of this record.

Martyria aren’t interested in simply recording interesting textures, instead taking listeners to the source through their authentically mystical expression. From its opening bell toll until its last notes fade into the annals of time, this tremendous debut succeeds not only as an incredible amalgamation of ritual ambient and world music, but an exercise in eschatological internalization.