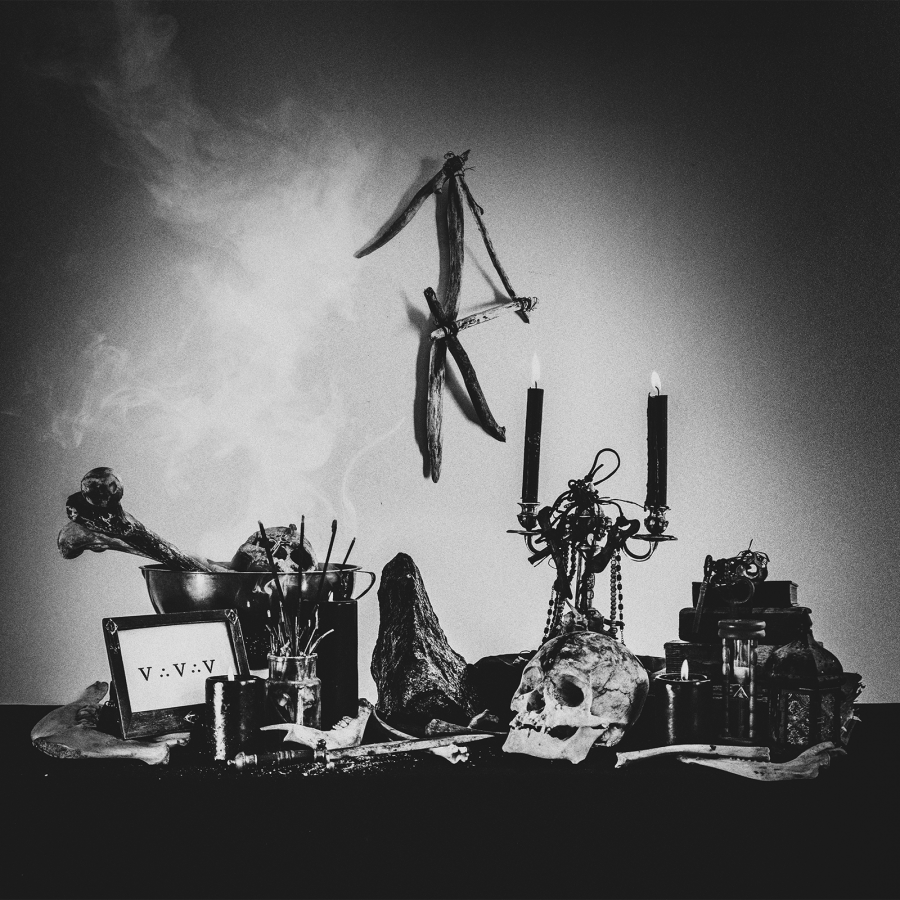 Injecting catchiness into styles as unfriendly as death industrial or ritual industrial might seem about as logical as trying to teach anteaters how to read, but that’s exactly what Swedish experimental artist Thomas Martin Ekelund has done with his newest release under the alias Trepaneringsritualen (TxRxP for short. You’re welcome.). Though thematically and aesthetically up to the standard this death industrial heavyweight set for mechanical dementia, Kainskult remains as infectious as it is caustic.

In comparison to the grinding ritualism of 2014’s Perfection & Permanence, this LP’s approach sports pervading accessibility in the midst of its harsh overtones. “Death & Ecstasy” starts Kainskult off familiarly enough with growls cadencing clanking thuds and tribal grunts, but incomes quasi-melodic vocalizations evoking the most disconcerting affectations of Michael Gira and Attila Csihar’s most atmospheric tendencies. This juxtaposition of hair-raising terror and penetrating emotion derails expectations while enhancing the impact of Kainskult tenfold, which only becomes more apparent when “Death & Ecstasy” collapses into “Maðr Malformed.”

This track and the following “All Flesh Has Corrupted” sear their grooves onto eardrums like a branding iron. The former’s driving tribal percussion and subterraneanly heavy synth lines provide the perfect backdrop for demonic chants, standing in contrast to the plodding tom-tom hits and echoing back-beat of the latter. Though intimate delivery pails before bestial brutality, these songs transcend genre norms as they embody a maniacal occultist dance while pummeling listeners to smithereens.

The importance of vocals on Kainskult needs to be stressed. In many ways they’re the nucleus for the album’s memorability. On top of expanding his range, Ekelund also collaborates with several other throat-masters this time around, allowing his lyrics to take center stage on multiple occasions through multiple filters, accentuating ceremonial auras while embedding his words into the souls of listeners. The factory-esque military percussion and bass pulse on “Feral Me,” while punishing enough in its own right, brutalizes to a tremendous effect through fiery gutturals. TxRxP is no longer just about scaring, but decimating.

As its title might have already clarified, Kainskult centers around the biblical character Kain, known to Judeo-Christianity as the first murderer, and to Ekelund as the “Original Heresiarch.” His explorations of both the metaphysical divergency and visceral malice at play in Kain’s story, when coupled with paranoia-inducing drone-scapes and dirgey percussion, produce some of the most haunting music in the genre. The depth charge percussive blasts and glacial sound collages in ambient tracks like “ᚲ ∴ ᚲ ∴ ᚲ” delve into the depths of Kain’s outlook, while more structured cuts harness his archaic infamy to drive their auditory destruction. 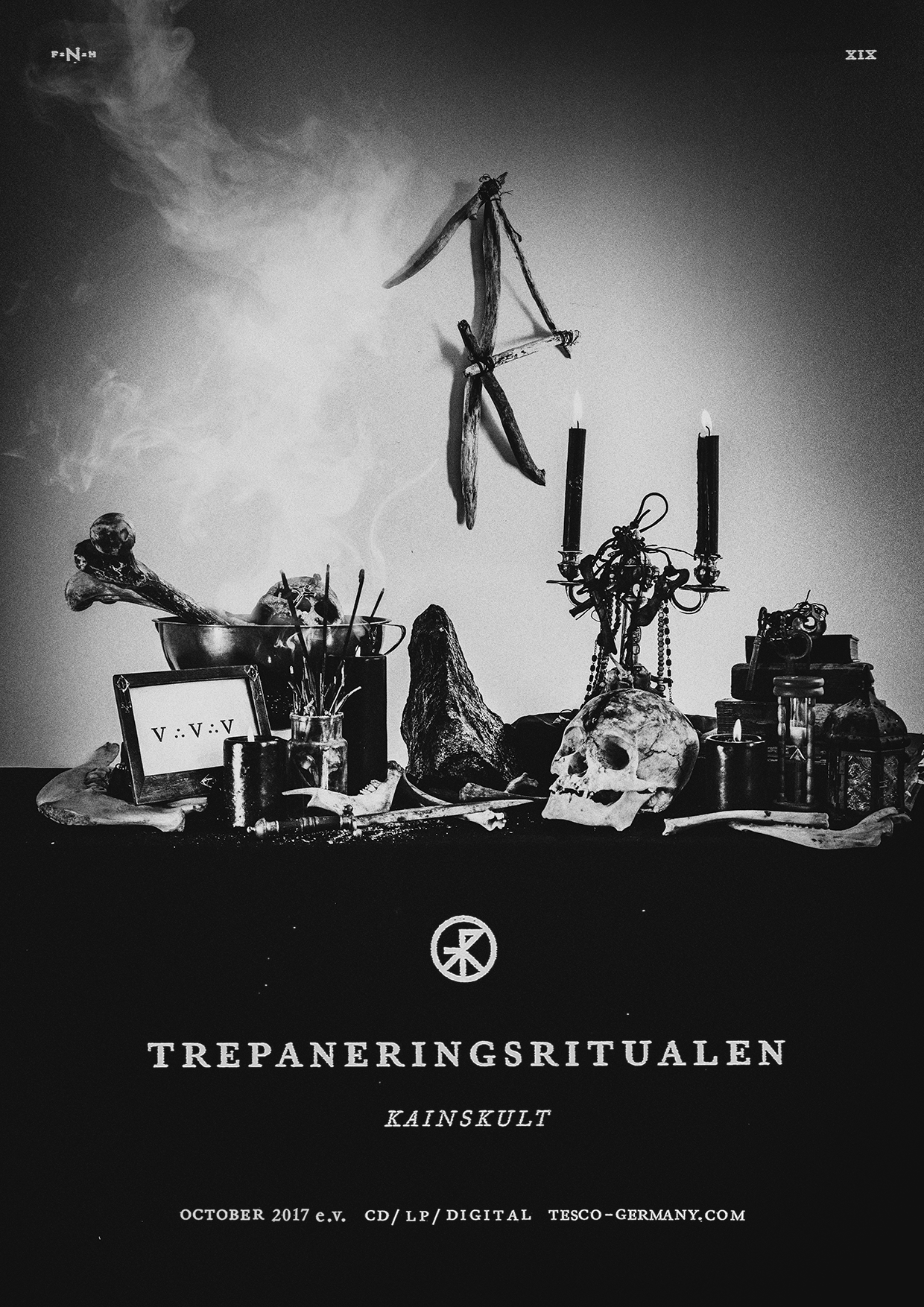 “Serpent Seed” and “An Immaculate Body of Water” respectively encapsulate Kainskult’s undeniable groove and atmospheric rites within impregnable harshness. The former employs triplet-based vocal patterns almost bordering on rap over a bludgeoning beat, while the latter’s ominous synth lead piles layers of filthy distortion and disembodied voices comparing to West Europe’s Stalaggh/Gulaggh in aural excruciation. With the exception of the 29-second interlude “∴,” which serves only to transition from the aforementioned track into the concluding “V ∴ V ∴ V,” these tracks conjure believable vibes while energizing TxRxP‘s overall sound.

In the final song, Ekelund showcases his ability to balance accessible forays with the cavernous terror he has become known for. A hypnotic industrial beat slowly gains more complexity, while cleverly-placed descending synth lines provide the perfect foundation for Ekelund’s one-to-100 vocal jumps. The atmosphere remains intact thanks to unique auras produced by grating gutturals and brooding mutterings, keeping listeners guessing until the album closes with dynamic leaps.

TxRxP has broken new ground for the death industrial sound while paying proper respect to the style’s inaccessible nature, something Ekelund’s contemporaries often struggle to accomplish. Many projects embrace outside influences as they try to push beyond their template, but this album remains firmly rooted in brain-bashing claustrophobia. Trepaneringsritualen produces something hardcore fans of this music will adore, but also provides enough glimmers of approachability for those lost in the sonic fray — making Kainskult one of the most potent death industrial releases to drop in recent years.