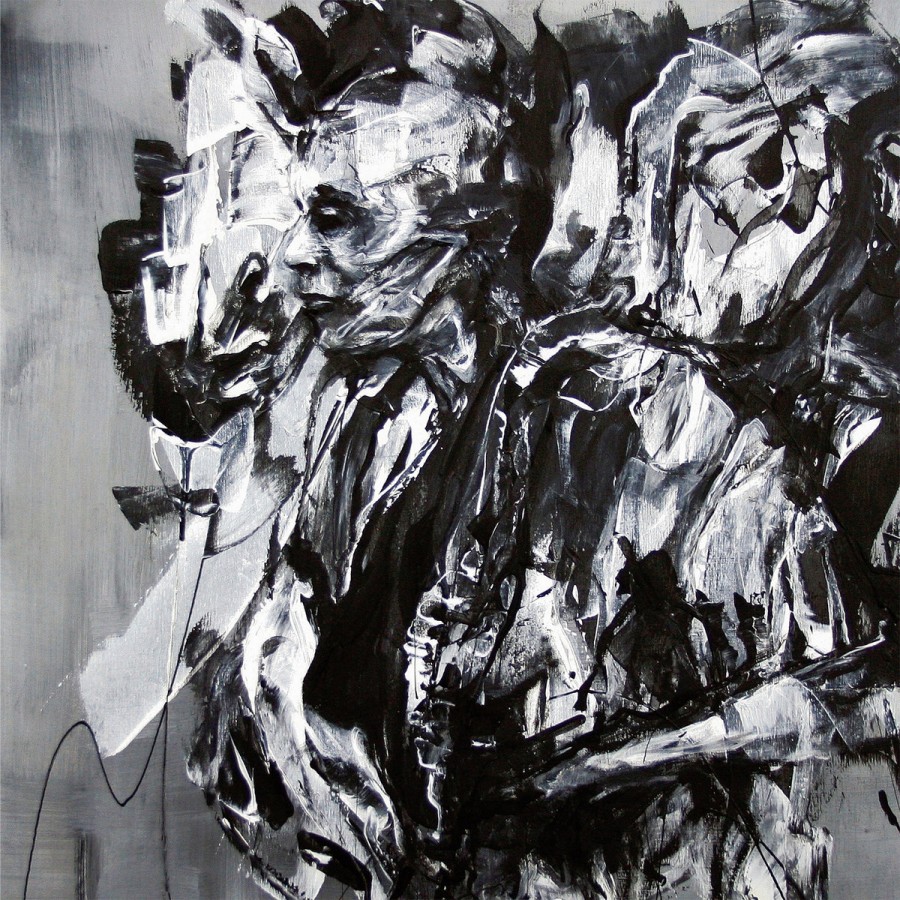 Stromstad is a collaborative project between Jasse Tuukki and Toni Myöhänen of STROM.ec and Kristoffer Oustad. STROM.ec of Finland have been spreading their variety of industrialized darkness to the world since their debut on Freak Animal Records, back in 2000. Since then, they have continued to make a name for themselves through such labels as Annihilvs, Malignant and it’s sub-label Black Plague. The Norwegian artist, Kristoffer Oustad, known for work under his own name, and also as part of the Kristoffer Nyströms Orkester with Peter Nyström, has proven his dynamic set of abilities as a high caliber dark ambient producer.

We got a morsel of Oustad’s taste for the heavier and grittier cousin of dark ambient, death industrial on his contributions to the latest, and highly recommended, Tumult by Shock Frontier (reviewed here), which released just prior to New Devoted Human, also on Malignant Records. STROM.ec have stayed consistently heavier throughout their career, having little room for the more reserved dark ambient sections that we hear throughout New Devoted Human.

So, when we get both projects together, STROM.ec and Kristoffer Oustad, the outcome is not entirely surprising in its style, but what is more surprising is the sense of fluidity and comfort these artists seem to have working together. The chemistry is what makes New Devoted Human such a gem for the small but passionate international community that follows this sort of music. Malignant Records saw it coming, which led them to the choice of giving the Stromstad debut a vinyl edition, which is something they’ve been doing more frequently, but still quite selectively.

There are tracks where the two different styles come together perfectly in a single track, through a whirlwind of noise and emotion. Tracks like “New Devoted Human” with its distorted guitars, industrial drum sections, and enraged screams, blend perfectly with Oustad’s more reserved and delicate dark ambient undertones. Early in this track, we can hear that dark ambient element lingering in the background, behind the much thicker noises of the STROM.ec guys. As the track progresses these dark ambient elements slowly, and almost subconsciously, move to the forefront. The track takes on a sort of violent narrative, as we move from the viciousness of the beginning sections into this wall of subtle darkness, a sort of uneasy calm as the dust settles just after a city is besieged.

Other tracks, like “Inherent Resurrection” and “Blood Consciousness”, keep the energy at maximum throughout their duration. Electronics blaring and angry vocals dictated, Stromstad give us the perfect example of a sort of post-industrial metal band. Yet, the meshing of varied genres can go even further afield at times, like on the chorus section of “Blood Consciousness” which features a dubstep-like component that is incredibly unlikely, but fits beautifully.

Intermingled with these high-energy tracks are dark ambient soundscapes which help the listener to paint a picture of this imagined future, which is as technologically advanced as it is apocalyptically devastated. The listener can get a sense of a future which took A.I., military-grade weaponry, and robotics to their darkest ends, creating a war-torn planet, upon which human life is no longer so cherished; a place where greed and technology come together, achieving the worst possible outcomes. “Nattsvermer” is one such track, where the perfectly executed dark ambient elements take prominence above a tapestry of industrial noises which lie in the background. Another is the closer, “Kosto”, which is the most reserved track on New Devoted Human, using gentle waves of synth to create an almost serene atmosphere, which helps the album to end on a more philosophical than apocalyptic note.

New Devoted Human is certainly a unique experience. This is something that will find a wide and unlikely set of fans. While I’ve focused on a few of the more prominent genre elements presented here, listeners will likely find a number of other genre influences which will enrich their personal experiences with the album all the more. I would foremost recommend this release to listeners that find the more dynamic releases on Malignant Records to their liking. For fans of a more strict definition of dark ambient, this will be a bit too heavy, but with that said, I think it is still worth giving it a try, they really have found a nice chemistry here, which doesn’t take any one element to too great an extreme.