Seesar: I do often incorporate droning of some description, but I also never incorporate only drones or droning that has no level of dynamics at all. I regularly 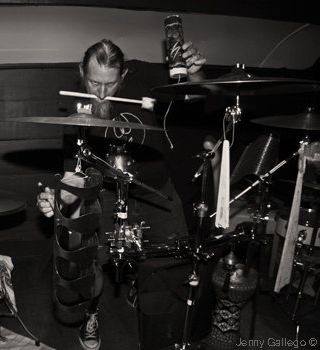 underscore my work with an evolving drone of some sort to juxtapose the more-active soundscape layered on top. Also, as an acoustic musician, I have to keep in mind that I will need to make lasting drones as well as perform other sounds without electronic assistance, therefore, in live situations, reproducing or emulating my recorded pieces would be extremely difficult if I over-used drones (and this is a discussion perhaps best left for the final, general advice discussion, but when creating works, especially ones that use droning, consider if you or your project will be both a live and recording project, or just one or the other. It will greatly inform how you approach drone use and creation.)

a. What are some of the techniques you use to create drones?

Treha Sektori: Bow on a guitar for example, slowed and pitch down vocals….

Stuzha: I use bass guitar these days. Just a quick picking or tremolo playing. Then, lots of delay and reverb on top of that.

Seesar: Acoustic drone creation can be tricky, but there are certainly some effective creation methods that can be translated to many situations. Bowing an object, shaking an object, or rolling or scraping something over an object can all be useful techniques to employ. I regularly bow cymbals, pieces of plastic, or homemade stringed instruments; attach a spring to a resonator and shake it; or place a ball or stones in a bowl and move the bowl in a circle, allowing the ball or stones to roll around inside the bowl, which will resonate loudly with a consistent movement. Singing bowl-style rubbing a piece of wood or metal against something is somewhat of a combination of these methods, and is also very effective on certain free-moving bodies. Mechanical means to generate constant movment or extended decays is another useful approach to creating a drone, such as rotating the tyre of a bicycle with the pedal, and then scraping the rubber of the moving tyre or generate a constant whining sound that can be either used unaltered, or be manipulated in the studio.

Skadi: I prefer multi-layered soundscapes with different automation to create ever-changing textures. Furthermore, I usually add some background “assisting” drones, like eerie choirs, or give the main drone more expression.

protoU: Sometimes I layer sounds on top of each other. Sometimes I just play a few synths at once and they create such an immersive feeling that it really needs just a bit of editing and a proper backbone, then it is done.

Taphephobia: I usually use a lot of reverb and echo, but not always. It depends on the sound.

Sonologyst: There are different ones, maybe infinite. It’s possible to make drones with stratifications of synth pads, by editing acoustic instruments like brasses, winds, string instruments and so on; playing heavily distorted bass and/or guitar; editing samples, using noise from modular synthesizers and on and on…

b. Do you have a favorite program/instrument to use for creating drones?

Skadi: Definitely Spectrasonics Omnisphere 2, since it’s a swiss army knife for sound design, and you have the opportunity to include your own samples, as well.

protoU: I think it’s mostly Kontakt, and morphing all the different field recordings I make.

Taphephobia: My guitar and Adobe Audition 3.0. I am pretty much a comfort-guy. If I like something, I try to stick with it.

Aegri Somnia: Reaktor enables you to create random calculated drones, and one life time is not enough to explore all its possibilities.

Seesar: Definitely bowing or scraping cymbals is one of my favourite means to create a drone. The overtones of vibrating discs can often interact with each other, even in just a basic, one-cymbal only situation, and typically complement and parallel over sounds to create rich, full-frequency passages. I also greatly like dragging a rubber ball over a membrane, like a large drum head, which is similar to bowing or scraping a cymbal, but with an entirely different timbre, and is also aesthetically pleasing and compositionally fulfilling. 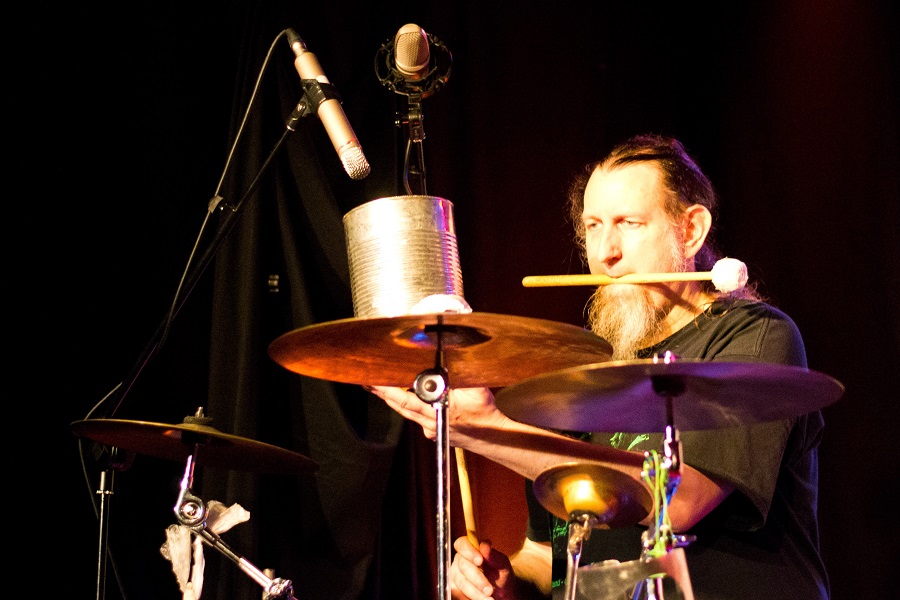 c. As a beginner did you create drones the same way you do now?

protoU: As an evolving artist, I always seem to change. It depends on how deep you get yourself into different techniques and plugins. I try always to be inspired by something you can’t actually grasp in full.

Treha Sektori: I am still improving.

Stuzha: I used various VST’s mainly, which I haven’t used for about 10 years now!

Seesar: Yes and no. I certainly used lots of cymbals and drums towards the beginning of my career because I was moving from being a math-punk drummer, goth rock drummer, and jazz drummer to a noise-making soundscape artist. Eventually, I found new methods to use and have expanded my techniques and approaches. But I still return often to cymbals and drums, because they simply host solid useful timbres and offer a multitude of possibilities for performance.

Skadi: In my early days, I created drones by filtering sounds and noise. Since filtered noise can cause some mastering issues and unforseeable effects, I changed my drones using “cleaner” sounds.

Sonologyst: As a beginner I made a lot of mistakes before finding my way.

d. Have you changed techniques/software/instruments for creating drones over the progress of your career?

Taphephobia: I used an older program, Cool Edit Pro. After the second album (I think??), I started to use Adobe Audition 3.0. And, I also began to use Ableton Live on the side for some years now, mostly for live-recordings and finishing the track in Adobe Audition.
I would say I am still not an expert at using Ableton. I haven`t really studied the program much, I just play my guitar and try different effects and record it.
In the beginning I saw myself as learning to make drones. I think it was on the Black City Skyline I felt that the music had a good flow. Also on that album the guitar became a main instrument. On, for example, House of Memories there are almost no guitars.

Mebitek: Changes are normal when you grow up as musician, until you find your way to make music.

Sonologyst: Yes I did it many times. And, I continue to change to make the sound fabric different in any production I do.

Treha Sektori: I change instruments as often as I can. I am not a good technician, but I am always seeking the tone that’ll move me. In every instrument I can find.

Skadi: Of course. As my rig changed to virtual studio tech several times, my techniques, software, and instruments changed as well.

Stuzha: Sure. I tend to use more live instruments nowadays to produce interesting and genuine sounds.

Seesar: Yes. Not only do I return often to the staples of cymbals and drums for drone creation, I regularly explore new ways to make drones (and non-droning sounds). Keeping in mind the basic Hornbostel-Sachs taxonomy of acoustic sound generation (vibrating strings, vibrating columns of air, vibrating bodies, vibrating membranes), one can investigate means of generating sound using one or more of these methods, as well as approaching the method of generation differently. To find fresh ways to create drones. I suggest exploring as much as you can, until you find the sounds you like and the ways to make them, which provide you with a variety of performance techniques, to enrich your arsenal of drones/sounds for your compositions.

e. How important are drones to dark ambient music?

Treha Sektori: Good way to move your guts. Always depends on your message. For me, drones appeal to the guts. A way to grab this physical part, to create an uncomfortable feeling. Or, on the contrary, to bring the auditor to a meditative state. But it is a nice way to create a balance in the moving parts, the climaxes.

Seesar: That depends entirely on your approach to composition and performance, and your aesthetic preferences. For me, I find drones effective for filling space underneath a more active layer of sounds, for setting a mood and supplying a track with a frequency root around which to compose, and for a timbral theme necessary for countering other sounds and dynamics. Dark ambient music is certainly possible to create without drones. Personally, I prefer dark ambient music to be more involved than just layers of drones. However, I also feel they are highly valuable and functional. So, I suggest to consider using drones alongside other compisitional elements, to maximize your creative possibilities.