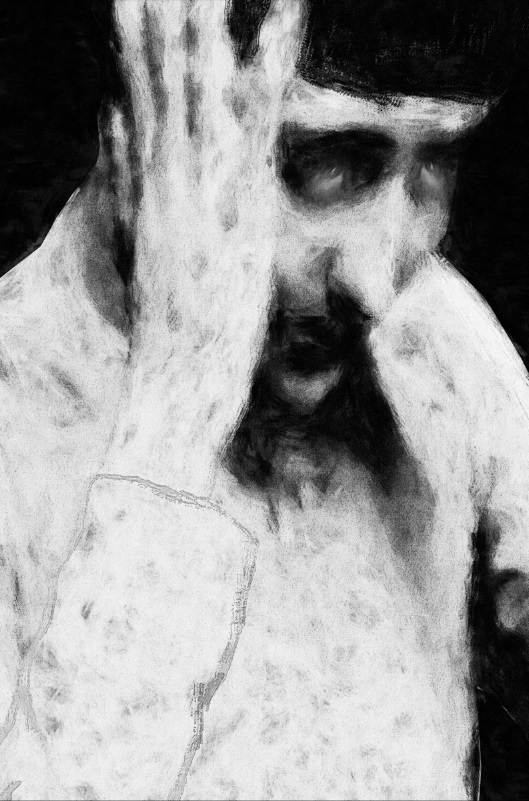 Tracklist:
Side A
01. The Paling of Bones
02. Trooping the Rim of My Skull
Side B
03. Pulsed In A Dull Glass Bell

Starting with the sounds of a music box, R.C. Kozletsky makes us think this will be a lovely experience, building on reminiscences of childhood. This is anything but the reality. Pulsed In A Dull Glass Bell is brutal. This is death industrial / black ambient done right. The soundscapes presented here are a thing of nightmares. Of chaotic, bloodthirsty demons, creeping from under the bed, grabbing an innocent child as they swallow their heart, screaming in terror for mercy.

R.C. Kozletsky is better known for his projects Apocryphos, Shock Frontier, and the now defunct Psychamanteum. 2016 was a huge year for this artist. Kozletsky’s second Apocryphos album, Stone Speak, took the dark ambient community by storm, quickly snatching up tags like “dark ambient album of the year” in the hearts of many of its fans, if not by the music industry itself. He also took part in the second collaboration with Atrium Carceri and Kammarheit, entitled Echo. Just like Onyx before it, these three collaborators were a match made in heaven, or in hell as it were.

Apocryphos is far from the only project that fans know Kozletsky from, he first came onto the dark ambient scene a few years back, fresh out of college, with his project Psychomanteum, of which he was one of two members. Despite its general praise among listeners, Psychomanteum was short-lived, only producing one full length album. Maybe out of the frustration from Psychomanteum breaking up, or maybe just due to the pitiful state of humanity in the modern world, Kozletsky needed to let off some steam. Shock Frontier was the project which allowed him to take out his sonic rage on innocent listeners. The Shock Frontier debut on Malignant Records was a powerful death industrial album, rivaling some of the greats of the genre.

Apocryphos was the revised vision of Kozletsky’s dark ambient. As a solo project, Kozletsky was able to prove that he lost none of his musicianship by becoming the solo member of a project. Both the debut, The Prisoners Cinema on Cyclic Law, as well as its follow-up, Stone Speak on Cryo Chamber, were brilliant examples of dark ambient done right.

But all this still wasn’t enough. Kozletsky still had other terrain to tread, new horizons to discover. The project R.C. Kozletsky finds its music falling somewhere between dark ambient and death industrial. The sounds shift from blistering noise, rattling metal, inhuman bellows, to something far more serene. Like two sides to a bi-polar madman, Pulsed In A Dull Glass Bell takes the listener to places they never knew they craved. The devastation is mirrored by the beauty. The villain showing his soft side to the victim, just before the murder.

Pulsed In A Dull Glass Bell finds its perfect forum in the cassette format. It should be listened to at full volume. This is something that is often said about death industrial albums, and barely holds true, if at all. Not so with Pulsed In A Dull Glass Bell. The tape hiss becomes part of the music, the sounds terrorize the speakers before plunging into a brooding staticy darkness. Tortured souls meet soulless victims. The mind is torn to pieces as the listener becomes fully encapsulated in this grotesque offering.

Each of the three tracks take on a life of their own. They pound the listener, brutally raping their senses. Leaving them bruised and bloodied, before calming, telling them its alright, taking on both aspects, executioner and victim. As the first side creeps toward its close, after the climax of the aural molestation, the sounds are broken, staticy, aging yet still aware. There is a moment of peace and serenity, when the listener forgets the trauma of the previous moments. As we flip the tape, the devastation continues full force. As the victim lies weeping in the filthy corner, tears mixing with blood and semen, the serial killer / executioner / Luciferian priest takes even more of their hatred out on the innocent soul. Side B, possessing a single track, named after the album title, slowly begins to creep back to full intensity. Droning, shifting layers stack upon one another taking us by surprise. This is a sonic assault in its purest of forms, a testament to the talents, and the rage, of Kozletsky.

Danvers State Recordings released this brilliant album in an ultra-limited edition. The tape features cover art by Pär Boström of Kammarheit, Cities Last Broadcast, and Hymnambulae. True to Boström’s tastes, the cover art is black and white, rough, emotive, only showing the portrait of some demented, pained soul. He holds one hand to his head, as if trying to make sense of the aural assault, caving beneath the terror of the soundscape. It is also worth noting that the album title, Pulsed In A Dull Glass Bell, is a phrase taken from the post-apocalyptic story The Road, a bleak and depressing narrative capable of bringing the most stoic of men to tears.

You will not find this album on Bandcamp, there are no tracks available online. You must take my word for it when I say that Pulsed In A Dull Glass Bell is an absolute masterpiece. A brilliant aural representation of the darkest and ugliest corners of the mind. Little praise will be found about this album, as its soft release on tape format has left it mostly off the radar of fans and zines alike, but this may be Kozletsky’s greatest achievement to date. If terrifying, insomnia-laden emotions are to your liking, there was no better album of 2016. I personally would love to see this album get a vinyl pressing in the future as the quality of the work and sound palette would fit perfectly to the vinyl format. You have been warned, this is not for the faint of heart. If you continue forward with this album, it may just change you forever.