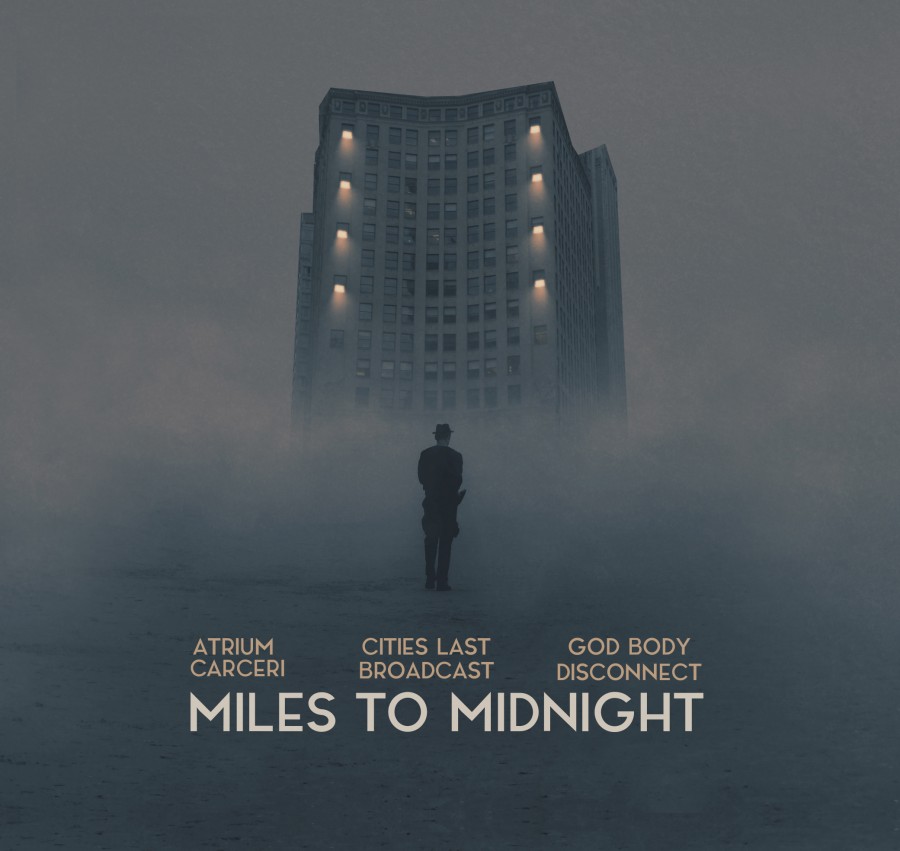 Miles to Midnight is one of those surprise records that you didn’t realize you needed until it presented itself. A collaboration between Atrium Carceri, Cities Last Broadcast and God Body Disconnect sounds like the perfect combination. But, then we add to this the unexpected dark jazz elements, which takes the concept from interesting to must-hear.

The first thing that will immediately jump out at any previous fans of these three artists is the addition of drums. It would seem that Bruce Moallem of God Body Disconnect was not ready to fully bury his love for the instrument, even if he’s moved on to the genre of dark ambient, which very rarely includes the use of a proper drum set. Throughout the album we hear these elements of dark jazz and dark ambient play off one another in a wholly unique way.

There really aren’t many albums out there that could be compared to Miles to Midnight. Of course, many of us will be familiar with dark jazz acts such as Bohren und der Club of Gore or The Kilimanjaro Darkjazz Ensemble. Miles to Midnight certainly plays off much of this style, but it also manages to keep its dark ambient roots intact along the way. Tracks like the openers “Miles to Midnight” and “A Thousand Empty Rooms” work heavily within the dark jazz framework, creating sounds that are vastly more “song-like” than much of the dark ambient genre’s output. Yet, particularly in the second half, with the exception of the closer “Quiet Days on Earth”, we hear tracks that keep the atmosphere intact while moving into territory more familiar to fans of these artists.

The reason for this stylistic shift from the first to second half of the album has to do specifically with the underlying theme of the album. The vinyl edition is the perfect fit for this release, on account of this split. Side A takes us through a sort of Lynchian crime-noir storyline, following a worn-down, unstable detective as he enters some seedy hotel with a dark history of murder. But as the detective makes his way to the 6th floor, he finds that this hotel has much darker energies than were first imagined. Side B takes us to “the other side”. We move from the scene of a gruesome crime on the lower levels to this twisted and otherworldly realm which has somehow made a connection with the upper section of the hotel.

Bruce Moallem of God Body Disconnect helps keep this first half in check, particularly through the use of his drum kit. We are able to enjoy something surely dark, but not necessarily unearthly. Though, as we move into the second half, the strange occult influenced talents of Par Bostrom from Cities Last Broadcast, among his many other varied and intriguing projects, become paramount in the recipe. The foundation goes from dark jazz to a twisted and troubling form of dark ambient. Bostrom’s vocal contributions, which can be heard creeping in and out of particularly the second half of the album give Miles to Midnight a truly mystical edge. Simon Heath’s (Atrium Carceri) contributions will be most noticeable to many in his piano elements, which fit perfectly with the dark jazz percussion of Moallem. Aside from their more obvious contributions, it seems fairly evident that each of these musicians contributed to the foundational layers of dark ambient throughout the album, in their own unique ways.

A particular highlight of the album, for me, is the closer, “Quiet Days on Earth”. On this track we return to the straightforward percussion of Moallem, which sets the foundations for the only truly dark jazz track on the second half of Miles to Midnight. There are guitar and piano elements accompanying this, which I expect are the work of Bostrom and Heath, respectively, but I can’t be certain. As the track nears its end we hear one of the most melodic and yet haunting vocal performances to-date by Par Bostrom, which really helps to fully solidify the dark jazz elements in our minds as the album reaches its close.

As I’ve been moving into my new apartment, this album has been pretty much on repeat for the last few weeks. The blend of dark ambient with dark jazz works in a way that gives the album energetic highs and lows, making it the perfect music for when one is trying to focus on some other project, but still wants to keep themselves thoroughly entertained. And yet, sitting down in the dark with a set of headphones, one is able to dissect the multitude of elements here, building a clearer picture of the underlying story.

Miles to Midnight is a brilliant and novel release for Cryo Chamber. Following on the footsteps of their recent release Heralds by Wordclock, Cryo Chamber takes the dark jazz elements in an even more focused direction. While they are obviously a dark ambient label at heart, it’s great to see them taking chances and testing the waters of different genre influences, which should ultimately make for a more diverse catalog of releases and widen their fan-base even further. A highly recommended release especially, but certainly not only, for fans of dark jazz!