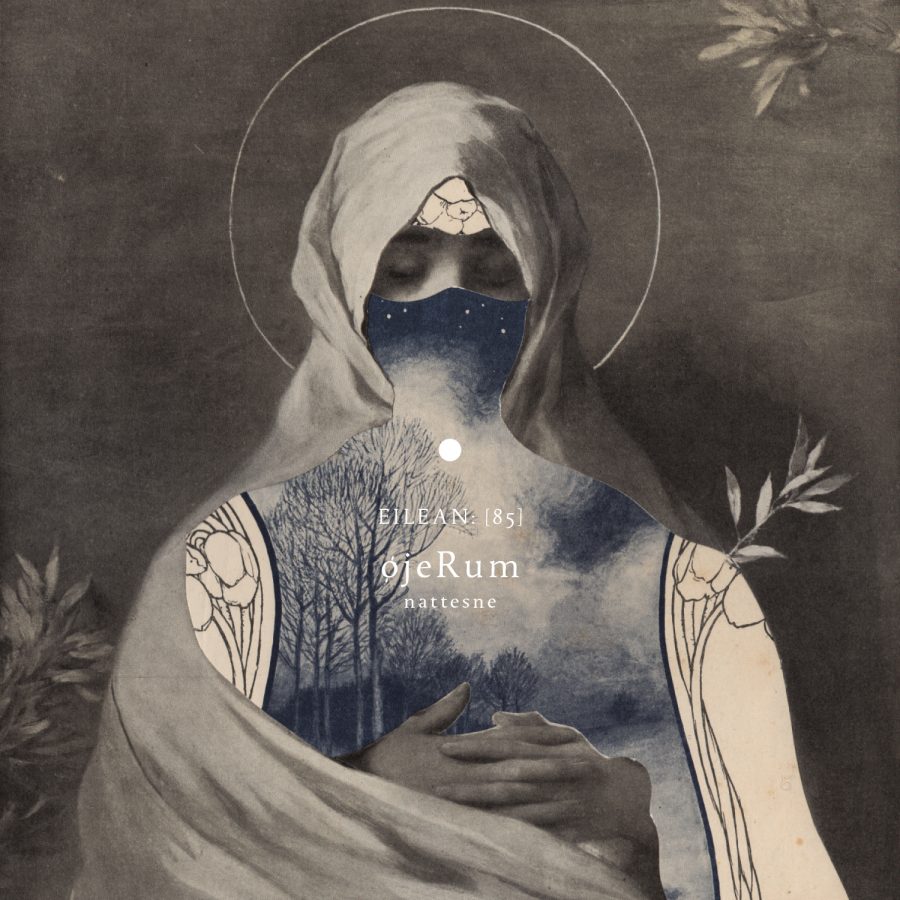 Nattesne quickly merges with the subconscious. As the listener falls into the pattern of the album, the music becomes a meditation of its own.

Eilean Rec. says of øjeRum:
“øjeRum is Copenhagen based musician and collage artist Paw Grabowski. Since 2014 he has put out releases on various labels such as A Giant Fern, Cabin Floor Esoterica, Eilean Rec., Phinery, Scissor Tail Editions and Vaald. øjeRum is all about the attempt to capture and convey emotions, moods and memories. two years and a half after his first release on eilean rec. we’re glad to host øjeRum for a second time on the map with the wonderful work: Nattesne.”

Before I heard this release, I was immediately captivated by the beautiful and evocative album art. The girl appears to be wearing a niqab and sitting in prayer or meditation. She is enveloped by a dull grey room, with sprigs of plants peaking out from behind. There is a halo behind her head (represented by the white circle). Her chest is an image of a snowy wooded landscape with the full moon peaking out from behind the trees. Her lower face scarf is a dark starry sky. So many narratives and emotions begin to immediately arise as I ponder the meaning of this artwork. This is the collage work of Paw Grabowski, the man behind øjeRum. 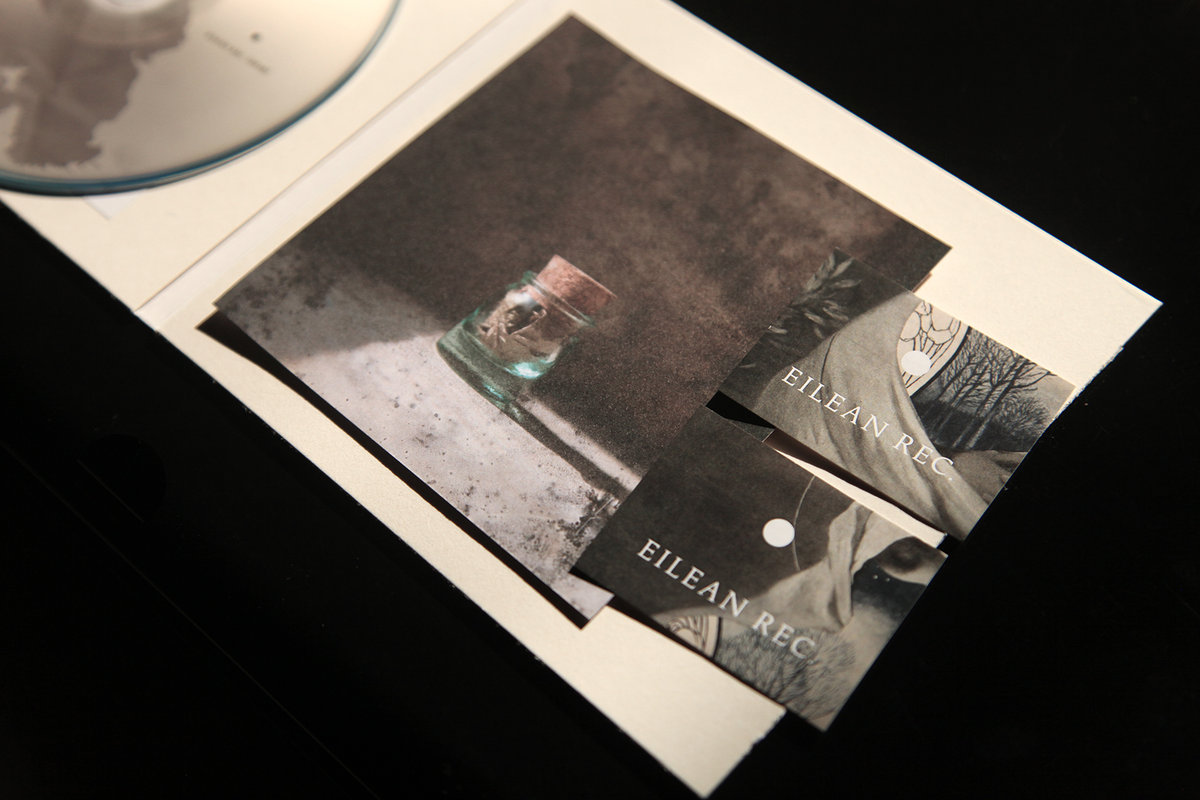 The album stays very true to the initial impressions I had of the artwork. There is a deep feeling of peace and meditative bliss present here. I don’t think I would call the music dark ambient, but it is pertinent to our sensibilities as listeners of that genre. There is a fleeting sadness, loneliness and isolation present throughout this release. These feelings reach an early climax on “V” with the help of vocalist Siri Anna Flensburg. Her voice draws all these feelings from meditation to loneliness to pure bliss into the six and a half minute track. Her voice melts into the tapestry of sounds, which on this track include a drone, which recurs throughout the album, accompanied by a dreamy and melancholic piano arrangement. This is the only time on the album that vocals or piano surface.

The majority of the album, aside from the aforementioned track “V”, has a recurring set of motifs. The guitar drone (not sure if it’s a guitar, it could be synth, but that’s not really pertinent) recurs through tracks I, III, V, VII, IX, XI, XIII, XV. You might notice that this is every odd track. Each time the album steers away from this template it is always certain to find its way back. The tracks filling in the even numbers alternate between two more templates.  A slowly strummed acoustic guitar allows its chords to resonate into the stillness. The remaining tracks feature another acoustic guitar but this time with picking progressions instead of strumming. The recurring nature of these elements drives the listener deep into a state of meditation, nostalgia, melancholy or some combination of the three.

Nattesne quickly merges with the subconscious. As the listener falls into the pattern of the album, the music becomes a meditation of its own. A spiraling staircase which one must ascend, only to find a brick wall at the top before the inevitable returning descent.

As alluded to by the imagery of the cover, the sounds of the album have a sort of “eastern feel” to them. The picked guitar sections could be a harp, the droning sections could be a flute, the strummed sections could be a sitar. And alternatively, the middle-eastern woman in prayer could be me, sitting in my American apartment in a deep meditation. Everything is cyclical and one, part of an inescapable whole. 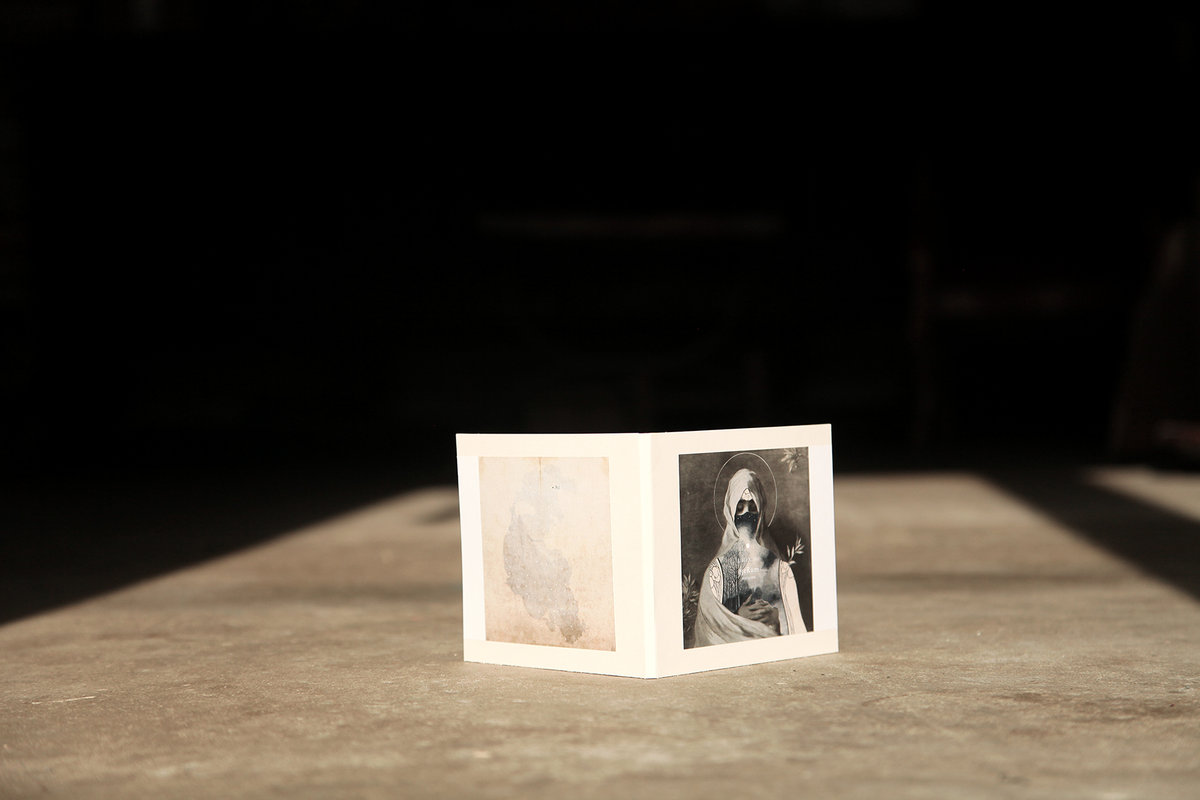 As I’ve come to expect, Eilean Records has presented us with another beautiful release. Likely the last of their winter series before the course shifts to spring motifs. The limited edition CD of Nattesne quickly sold-out, as expected. Though there may still be a few copies floating around for sale outside the label. I always find Eilean Rec. releases to be perfect for the dark ambient sensibilities while only treading on the outer boundaries of it. Of course, dark ambient isn’t what they are going for, I only mention it because it’s the focus of our site! However, I doubt there will be many listeners questioning its appeal to our tastes.

I highly recommend Nattesne, and I equally recommend listeners explore the back-catalogs of øjeRum, as well as Eilean Records. There are many treasures still to be discovered for readers that dig this release!

Kaya North – That Comes from the Tree and the Mist – Review