Since I was a young teenager, I’ve always been drawn to incense. From the little old box of Shoyeido sandalwood sticks in my grandmother’s cupboard, to the billowing plumes at the local head-shops and magical supply shops, I grew up priding myself on being a connoisseur of incense. I tried all sorts of sticks and cones, a million brands and flavors. I had a few favorites that were consistent for me over the years, Srinivas Sugandhalaya’s Satya Sai Baba Nag Champa at the top of that list. 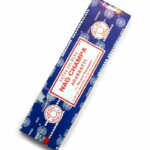 As I got older and more interested in the religious/spiritual histories of incense use, in places like Catholic cathedrals and Buddhist temples, among many others, I began to suspect that the incense we were burning was not at all what our ancestors had burnt/intended. It seems that, just like so many other things in modern times, we  most often get the mass-marketed version.

I really never thought much more on the topic for years, and especially after several more failed attempts at finding something “traditional”, I was resigned to the realization that if I wanted to burn incense it was going to be, basically, synthetic garbage.

Sometime around 2013, I finally ran into incense resins. Once the concept entered my mind, it was like a lightbulb turned on, just buy and burn the raw materials, skip the manufacturing step. Brilliant.

Well, I went online… found a random website that told me I needed some “frankincense resin” and “quick-lite incense charcoals”. They were even kind enough to direct me to the mass-produced resins website and showed me exactly which chemical-laden charcoal briquettes to purchase. Brilliant…

So, of course, I’ve now bought into the unsustainable harvesting and unethical trade agreements that went along with the resins, and my house stinks to hell with the smell of lighter-fluid/sulfur…

Incense Burning 101 – How to Burn Resins