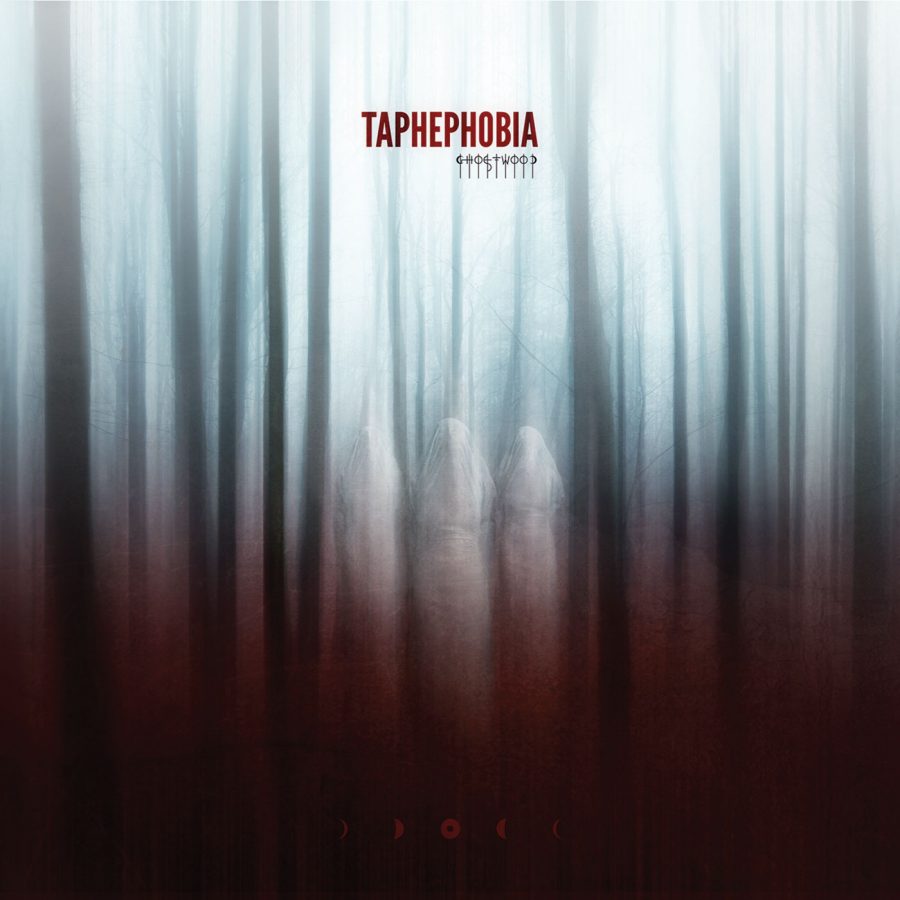 Tracklist:
01. Ghostwood
02. Watching the Storm Crows
03. Transformed Through Alienation
04. Ghost of Him
05. Hospital Ward
06. Unwanted Visitors
07. Thunder Over The Boardwalk
08. The Other World Doesn’t Exist – Part 1
09. A Bitter Alternative
10. Fragility, Secrets and Revelations

Ghostwood is the 7th full length solo release from Taphephobia, the one man dark ambient project out of Trondheim, Norway, created by Ketil Søraker. Søraker has been creating music as Taphephobia since around 2004, after he split from Northaunt. To this day, Ketil Søraker and Hærleif Langås are still friends and worked together on a project in 2009, entitled Mulm, along with fellow Norwegian Avsky. Langås has also contributed album art for several Taphephobia releases. In other noteworthy news, concurrent with the release of Ghostwood, Taphephobia released a split, also through Cyclic Law, with Kave, a dark ambient project by Bram Gollin out of the Netherlands. (Read our review of that split here.) Yet another recent release by Taphephobia worth mention is the re-issue of his long sold-out debut House of Memories, which found its new home on Reverse Alignment. So, it’s quite obvious that Ketil Søraker has been staying very busy recently.

Ketil Søraker said in a recent interview on Terra Relicta that he’s been working on this new release Ghostwood from 2012-2015. So, it should be immediately obvious that this gentleman is not one to hastily toss any half-baked idea onto Bandcamp, saturating his discography with filler. Instead, Søraker puts quality over quantity and makes sure that each Taphephobia release we hear will be something special. Something to treasure for years to come.

Followers of previous works by Taphephobia should, by this point, expect an album that is heavily focused on the use of guitar to create these droning soundscapes. While Ghostwood holds to that formula, and even increases on it in ways, there is a new element here in his use of flute. Adding these processed flute sections to the release gives it a bit more natural vibe, the wind instrument adding a nice complexity to the usual string based arrangements. It also helps add to the theme, as some of these flute sections can remind the listener of birds chirping, deep in this lonely forest.

There are sections with more synthetic sounding dark ambient elements. But several tracks on Ghostwood take Søraker’s use of guitar to a bold new level. We can most notably hear this element on “Transformed Through Alienation” which allows a clean guitar sound to rest atop the droning elements which built the foundation of the track. These slowly strummed guitar chords add wonderfully to the elements of sadness and solitude, which are always so prevalent in Taphephobia. Though it might also be mentioned that this clean guitar-work could have a potential negative, as I’ve found it can be a bit jarring if I’m falling asleep with Ghostwood playing. This is, however, a minor issue for me, as I don’t expect any dark ambient artist to create an album with a constant focus on keeping it “slumber-friendly”, unless a sleep-themed album is the primary goal.

Another track of particular note is “Hospital Ward”, which many have pointed out has a more positive tone than the majority of Søraker’s previous work. The clean and clear guitar sounds, mentioned above, are also present on this one. The chord progressions used, as well as the sort of higher-pitched and faster-paced backing drones give the track an undeniable sense of light and hope. But, it doesn’t come close to pushing into “happy” territory, there is still plenty of melancholia drenching every second of Ghostwood.

Søraker’s voice is used sparingly but is certainly noticeable throughout Ghostwood. We hear him softly speaking various phrases through “Unwanted Visitors”. “Thunder Over The Boardwalk” might be my favorite track on the album. We have Søraker singing here, in a half-whisper, like we’ve heard occasionally throughout his career. This track seems to sort of pull together all the great elements of Ghostwood. As mentioned, the vocals are present, and they are one of the most successful uses of vocals in Taphephobia I’ve heard to-date. But there is also a very clear guitar element present. These two elements blend beautifully atop the serene-yet-melancholic droning undercurrents. One can almost feel themselves on a lazy afternoon stroll, alone, down some long-forgotten boardwalk, watching as the clouds slowly condense and darken, preparing for a violent storm.

Ghostwood is, to me, the full embodiment of Ketil Søraker’s vision of Taphephobia. What started as him looking for his own sound, with House of Memories, has slowly progressed into what is now referred to as “the Taphephobia sound” describing his combination of synthetic and guitar drone, matched with sparse, somber vocals, and a deep, sometimes overwhelming, sense of melancholia. Taphephobia should be one of the leading dark ambient artists for listeners looking for active yet peaceful dark soundscapes. The guitar and vocal elements make for a nice familiarity factor for those less versed in the styles of dark ambient. Creating an album which is inviting to the newly initiated, but also solid enough to attract praise from the most die-hard genre fans is a feat worth congratulating. With all this said, I would recommend Ghostwood to dark ambient fans, old and new, that find more active, yet still relatively reserved forms of dark ambient to their liking. This one should be considered a milestone in the career of Taphephobia, and an indicator that Søraker still has plenty of new ideas to share with the world.